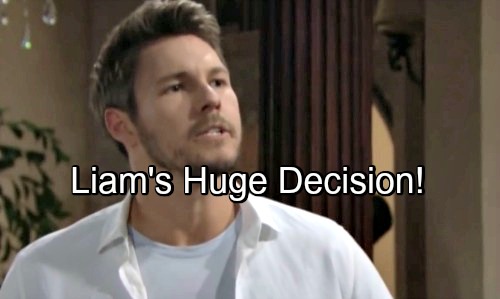 The Bold and the Beautiful spoilers tease that Liam’s (Scott Clifton) maturity continues. He’s gained a clear understanding of where he stands with Steffy (Jacqueline MacInnes Wood). Liam also has a clear path to a life with Hope (Annika Noelle), if he wants it.

Clifton’s character waffled for more than a year. Last summer he was gaga over lady Sally (Courtney Hope). Yes, that was an open nod to the terrific musical performer.

Clifton is quite the actor himself. His pitch perfect jellyfish portrayal of Liam served to fully enable deep conflict. If he’d only remained focused on Steffy, instead of involving himself in Sally’s family company and then, her personal life, Steam might have been okay.

But chaos didn’t end when Lally’s involvement was over. Instead, Hope returned from Europe, as Noelle became the recast of this character, and Lope began to reform.

Bill (Don Diamont) told Liam on a recent B&B episode that he hoped, in time, forgiveness would eventually be given. Bill didn’t ask for and fully admitted that he didn’t deserve Liam’s absolution, but at least relayed an important message to his son. Yes, the contriteness within this broken man was affirmed. It was a start.

Sally is with Wyatt (Darin Brooks) and hasn’t been interested in Liam for awhile. So, she’s fully out of the picture.

Last week Steffy chose herself and Kelly. Actually, those lines of dialogue should have been written like this, “Liam, I’m choosing Kelly and myself.”, as that’s what most selfless parents do. They put their child, or children before themselves. That was a subtle reminder that Steffy really is more like Bill than Liam.

No slack is being given to Steffy regarding the words she spoke, as she’s since said them again. She puts herself first and after that, Kelly.

Hope is not a selfish person. Yes, she’s idealistic, but also kind. Personality wise, she’s far more suited to Liam’s softer personality than Steffy’s rah-rah, sis, boom, bah, me, myself, I, center-of-attention, cheerleader rant ever was.

The Bold and the Beautiful spoilers say Liam may opt to ask Hope to marry him, without Steffy orchestrating the engagement ring ceremony the next time around. It feels like Hope would respond with yes, and not feel the need to tell Liam that a modern woman doesn’t need to be chosen.

Agendas drive that type of thinking, along with those types of written and spoken lines appearing in daytime and as pushed in popular culture. Ah, some old-fashioned tricks are timeless.

Life in Los Angeles would likely be much easier for Liam with Hope than it ever was going to be with Steffy. While it’s not what Bill meant during the many times he suggested it, Liam and Hope do appear meant for each other.

Now it’s time to move forward. So maybe B&B is working toward Lope in its fictionalized version of this famous California city? Liam seems set to soon tell which way he’ll go. CDL is a leading source for everything linked to The Bold and the Beautiful. Check back regularly for B&B spoilers and news!