BY Kinsley Goldman on February 6, 2018 | Comments: one comment
Related : Soap Opera, Spoiler, Television, The Bold and the Beautiful 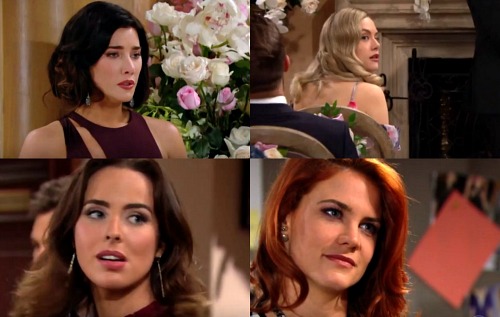 The Bold and the Beautiful (B&B) spoilers tease that a shocker’s coming up at Ridge (Thorsten Kaye) and Brooke’s (Katherine Kelly Lang) wedding. The guests won’t know how to react when something unexpected occurs. What could leave them so stunned? This might involve Liam (Scott Clifton) and his reluctance to attend the wedding with Steffy (Jacqueline MacInnes Wood).

Liam turned down Brooke and Ridge’s invitation, but Steffy’s been pestering him about it anyway. It looks like her final push will fail in Wednesday’s B&B episode. Steffy will be dejected when she’s forced to attend the nuptials alone. She won’t think this can be much of a celebration without Liam by her side.

Nevertheless, Steffy will try to fake a smile and hold in her tears. She won’t want to spoil Ridge and Brooke’s happy day. Meanwhile, Liam (Scott Clifton) will have a chat with Wyatt (Darin Brooks). After he opens up about how he can’t forgive Steffy, Liam learn a big secret in return. The Bold and the Beautiful spoilers say Wyatt will admit he’s involved with Katie (Heather Tom).

Wyatt will point out that they’ve faced a bit of a hiccup thanks to the wedding. He’ll suggest that it seemed like Katie didn’t want him there. However, Wyatt will gush about how much fun they have together. He might argue that it’s been nice to fall for someone brand-new. Lack of history can be a good thing, especially on a soap.

Liam will urge Wyatt to hang in there and let love take its course. He might even get an idea after his brother’s confession. Could Liam be drawn to a new option as well? Liam has a complicated history with Hope (Annika Noelle) and Steffy, so maybe he’ll consider starting fresh with Sally (Courtney Hope). They shared a kiss that caused some trouble, but the slate’s mostly clean.

Sally is clearly interested in Liam, so she’d jump at the chance to date him. Will Liam decide to invite Sally to the wedding? Will he think that’s the best way to show Steffy that they’re truly over? Even if they can’t make it in time for the actual ceremony, there’s always the reception. Regardless, they could make a grand entrance and give the guests quite a shock.

Steffy and Hope would certainly be thrown for a loop! Whatever happens, The Bold and the Beautiful spoilers say Sally will rev up her efforts soon. She intends to do everything in her power to win Liam over. We’ll give you updates as other B&B news comes in. Stick with the CBS soap and don’t forget to check CDL often for the latest Bold and the Beautiful spoilers, updates and news.