BY Heather Hughes on April 6, 2018 | Comments: one comment
Related : 16 And Pregnant, Soap Opera, Spoiler, Television, The Bold and the Beautiful 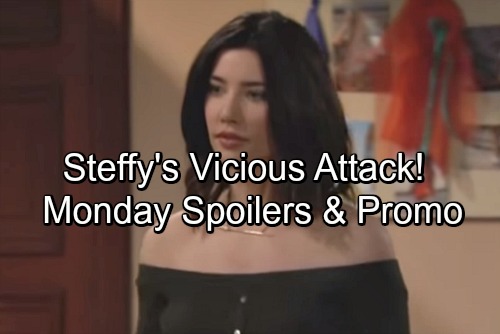 The Bold and the Beautiful (B&B) spoilers for Monday, April 9, tease that Steffy (Jacqueline MacInnes Wood) will lay down the law. She’ll let Hope (Annika Noelle) know that her little games aren’t going to be tolerated. Steffy will insist that Liam’s (Scott Clifton) her husband, so Hope should find someone else to focus on. She’ll snarl that Hope should back off, but she won’t get her wish.

Hope will make it clear that she knows what’s best for Liam. She’ll argue that their toxic relationship will only bring him sorrow. Hope will contend that Steffy will just screw up again and when she does, Liam will be the one who truly suffers. She’ll maintain that a clean break is necessary to preserve Liam’s sanity.

While Hope and Steffy’s argument revs up, it looks like Liam will pay Bill (Don Diamont) a visit. He’ll still have plenty of regrets to get off his chest. The Bold and the Beautiful spoilers say Bill will open up about some changes in his heart. He’ll suggest that almost dying was a wake-up call. Bill will guess that it served as one for Liam as well. 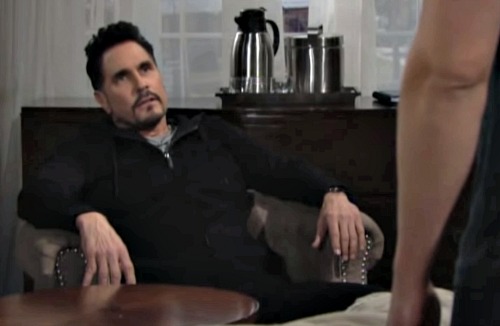 Liam never thought he’d be capable of trying to kill his own father, even with a concussion. He’ll once again express regret, but Bill will just come back to the point he’s trying to get across. It’s time to focus on moving on and letting go – at least that’s how Bill feels right now!

Of course, Steffy’s name will come up during this B&B chat. Will Liam confess that he told Steffy to be with Bill instead? That could easily fill Bill’s head with big dreams for the future again. Elsewhere, Thorne (Ingo Rademacher) will plant a few ideas of his own. He’ll meddle in Katie (Heather Tom) and Wyatt’s (Darin Brooks) relationship by mentioning the potential custody battle for Will (Zane Achor).

Thorne won’t think Bill is going to let it go. He’ll ask if Katie’s really willing to trade her son for her fiancé. Katie’s sure to be a bit rattled by Thorne’s attempt to stir the pot. We’ll give you updates as other Bold and the Beautiful news comes in. Stay tuned to B&B and don’t forget to check CDL often for the latest Bold and the Beautiful spoilers, updates and news.