The Bold and the Beautiful Spoilers: Monday, February 12 – Wyatt Shocks Katie by Breaking Things Off

BY Heather Hughes on February 9, 2018 | Comments: one comment
Related : Soap Opera, Spoiler, Television, The Bold and the Beautiful 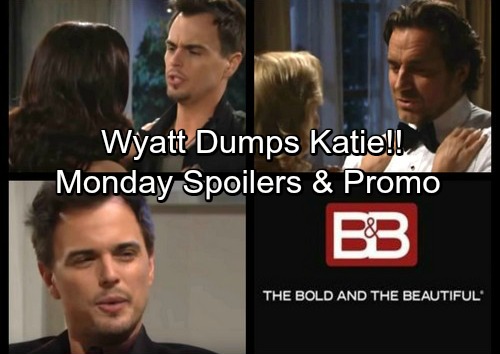 The Bold and the Beautiful (B&B) spoilers for Monday, February 12, tease that Wyatt (Darin Brooks) will battle some pain. He witnessed a kiss between Katie (Heather Tom) and Thorne (Ingo Rademacher), so he’ll still be trying to recover from the blow. Wyatt told Katie he wanted a no-strings-attached relationship, but his feelings are much deeper than that. He’d like to be the only man in her life.

However, Katie and Thorne’s smooch will change the game for Wyatt. He’ll feel like he’s holding Katie back. Wyatt will drop some hints in hopes of getting a confession out of Katie. He’ll want her to admit she kissed Thorne, but he won’t come right out and say it.

Of course, it’s really none of Wyatt’s business who Katie kisses. He can’t tell her “no strings” and then be angry if she seeks some fun elsewhere. Regardless, Katie won’t take the bait. She’ll stay silent about locking lips with Thorne at the reception.

A frustrated Wyatt will decide no point in continuing their romance. He’ll choose to bow out and let Katie be with Thorne if she wants. Wyatt will break things off and blame it on other issues. He’ll suggest that this is for the best. Wyatt will argue that he can throw himself into his career and other projects.

The Bold and the Beautiful spoilers say Katie just won’t understand where all this is coming from. She’ll have to accept Wyatt’s decision, but it’ll be hard. Katie’s feelings for Wyatt as just as deep, so these two need to try getting on the same page. Stay tuned to see if they’ll ultimately work it out or go their separate ways. 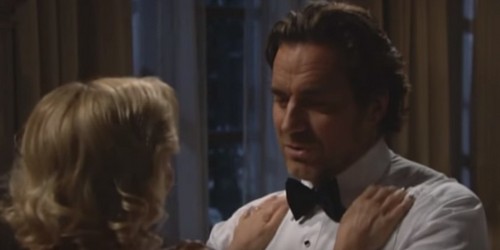 Other B&B spoilers state that Ridge (Thorsten Kaye) and Brooke (Katherine Kelly Lang) will finally get some alone time. They enjoyed celebrating their marriage with all their loved ones, but they’ll be ready to wind down together. Brooke and Ridge will talk about Stephanie (Susan Flannery) during this warm conversation. They’ll reiterate that Stephanie was with them in spirit and would’ve approved.

Ridge will insist that they have a bright future ahead of them. He’ll tell Brooke that as far as he’s concerned, she just became the Forrester matriarch. Quinn (Rena Sofer) has been kind lately, but she might disagree with that! We’ll give you updates as other Bold and the Beautiful news comes in. Stick with B&B and don’t forget to check CDL often for the latest Bold and the Beautiful spoilers, updates and news.