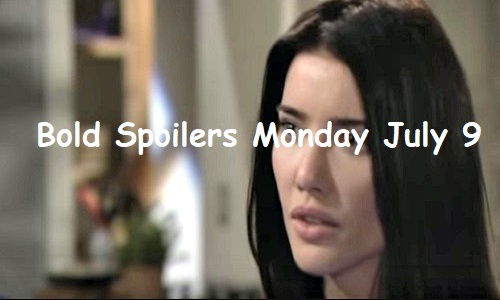 The Bold and the Beautiful (B&B) spoilers for Monday, July 9, tease that Steffy (Jacqueline MacInnes Wood) will continue to process Liam’s (Scott Clifton) news. She was stunned when he came clean about Hope’s (Annika Noelle) bun in the oven. Steffy eventually calmed down and insisted they could handle this, but she’s obviously not happy.

Liam will be forced to defend Hope in Monday’s episode. It looks like Steffy will blame her rival for getting herself knocked up. Liam will gently suggest that Hope didn’t intend to get pregnant, but Steffy may not be so sure. She seems to think Hope’s capable of sinking that low.

Nevertheless, Liam will take responsibility for his role in all this. He can’t undo his actions, so they’ll just have to deal with the drama. Hope’s intentions clearly aren’t the main issue here. What’s done is done, which means Steffy will just have to get used to the idea of sharing Liam.

Liam will have to split his time between two families, but Steffy will refuse to give him up romantically. She’ll do whatever she can to keep their B&B wedding goals on track. Of course, Liam may drag his feet a bit. Steffy will hope that he still wants to get married and he may agree. However, this could easily cause a postponement and bring more strife for “Steam.”

Over with Sally (Courtney Hope), she’ll rant about Hope (Annika Noelle) the buttinsky. Sally can accept that Hope’s going to be a nightmare professionally, but she’ll think meddling in her personal life is crossing the line. Wyatt (Darin Brooks) doesn’t care what Hope or anyone else thinks, so that should give Sally a little comfort. At least she still has a great guy in her corner!

Other Bold and the Beautiful spoilers say Kiara Barnes will make her debut as Zoe. This mysterious character will overhear part of Sally and Wyatt’s conversation. Zoe will wonder if she can make the info work in her favor, but she’ll turn her attention to Xander (Adain Bradley) soon enough. It appears Xander and Zoe have a history, so she’s bound to shake things up for him.

In the meantime, Xander will come clean to Emma (Nia Sioux). He’ll probably start using his British accent and reveal more about where he really comes from. The Bold and the Beautiful spoilers say Emma and Xander will grow closer, but they’re better watch out for Zoe! We’ll give you updates as other details emerge. Stick with B&B and don’t forget to check CDL often for the latest Bold and the Beautiful spoilers, updates, and news.