BY Heather Hughes on June 15, 2018 | Comments: one comment
Related : Soap Opera, Spoiler, Television, The Bold and the Beautiful 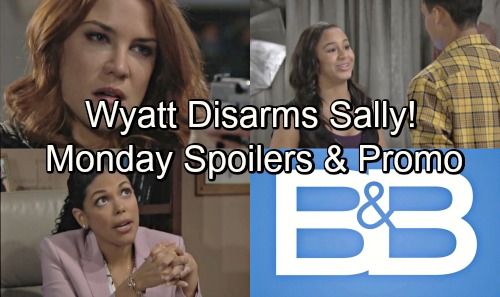 The Bold and the Beautiful (B&B) spoilers for Monday, June 18, tease that drunk Sally (Courtney Hope) will remain a threat to Wyatt (Darin Brooks). She fired a shot in Friday’s episode, June 15, which thankfully missed him. However, Sally will continue to aim in Wyatt’s direction. She’ll cry as she scowls and rants about Wyatt’s father. Sally obviously hates Bill (Don Diamont) enough to take it out on his son.

Of course, Wyatt will urge Sally to cool it. He loathes Bill just as much as she does, so he should make that clear. Wyatt won’t think he should pay the price for his devious dad’s mistakes. There’s no need to do anything crazy here.

The Bold and the Beautiful spoilers say Sally will ultimately agree and lower her weapon. She’ll be sorry she went off on Wyatt like that. Sally’s just suffering and doesn’t know how to deal with it. Fortunately, Wyatt will listen to more of Sally’s troubles and provide support. He’ll open up about his own drama as well. Their mutual hatred for Bill will bring them together and help them bond.

Meanwhile, Emma (Nia Sioux) will share her excitement with Xander (Adain Bradley). She’ll indicate that she’s thrilled about her latest Hope for the Future opportunity, but she’s also a bit nervous. Emma will suggest that she’s got a shot at impressing Hope (Annika Noelle) and she doesn’t want to blow it.

Xander will assure Emma that she’s going to be great. He might joke that her dancing knocked him right off his feet, so he’ll have high hopes for the upcoming preview. Over with Maya (Karla Mosley), she’ll seem wary of Emma. Maya should become even more suspicious when she finds out Emma’s real last name!

B&B spoilers state that Emma’s big secret will come out. Maya will realize Emma’s a Barber, so she’ll worry about the intern’s ties to Justin (Aaron D. Spears). He happens to be Bill’s right-hand man and that’s concerning news for Forrester Creations.

Later, Maya will decide she has to take action. Emma will be fired pretty soon, but Justin will go to bat for his niece later this week, June 18-22. We’ll give you updates as other Bold and the Beautiful details emerge. Stick with B&B and don’t forget to check CDL often for the latest Bold and the Beautiful spoilers, updates, and news.