BY Heather Hughes on June 22, 2018 | Comments: one comment
Related : Soap Opera, Spoiler, Television, The Bold and the Beautiful 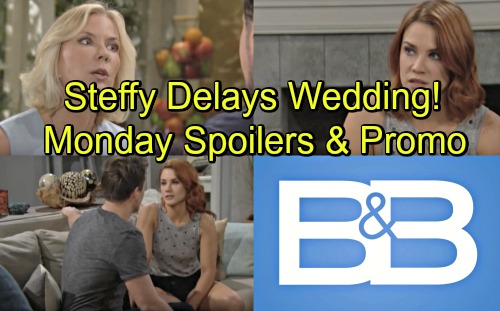 The Bold and the Beautiful (B&B) spoilers for Monday, June 25, tease that Steffy (Jacqueline MacInnes Wood) will face a difficult task. She’ll have to come up with an excuse to delay her marriage to Liam (Scott Clifton). The real reason is Steffy doesn’t want her mom to land behind bars! Bill (Don Diamont) could make Taylor (Hunter Tylo) pay the price if Steffy doesn’t call off the wedding.

However, Steffy won’t want to come clean about any of that. She’ll need another explanation for this delay, but finding one won’t be easy. Steffy will probably argue that there’s no point in rushing. After everything that happened with Hope (Annika Noelle), Steffy may suggest it’s wise to wait. She might contend that they should just enjoy their daughter and let their relationship grow again.

Of course, Liam will be awfully suspicious. Steffy has been begging him to get back together for what feels like forever. Liam won’t understand why she suddenly wants to pump the brakes. The Bold and the Beautiful spoilers say Steffy will try to throw Liam off the trail. She’ll hope she can buy some time and eventually talk some sense into Bill.

Meanwhile, B&B spoilers say Sally (Courtney Hope) will have another chat with Wyatt (Darin Brooks). She won’t plan to make a habit of staying at his place. Sally just didn’t have anywhere else to go! She’ll intend on finding a home of her own soon, but Wyatt certainly doesn’t seem to mind the idea of a roomie.

Sally and Wyatt will make love later this week, so she’ll obviously be spending a lot of time there anyway. Until then, it looks like Sally may commiserate with Hope (Annika Noelle). She’ll suggest that they’re both women who have suffered at the hands of Bill Spencer. There’s a chance they could bond a bit over that, but any progress will be blown once Sally joins the staff at Forrester Creations.

Eric (John McCook) will put Sally on the Hope for the Future line soon, so The Bold and the Beautiful spoilers say there’s going to be trouble. Elsewhere, Brooke (Katherine Kelly Lang) will explode at scheming Bill (Don Diamont). She’ll really let him have it over the devastation he caused. Liam, Steffy, Hope and Wyatt all suffered thanks to Bill’s ruthlessness.

Brooke won’t understand how Bill could be so cruel to his loved ones. When he defends his actions, Brooke should see that she’s wasting her time. There’s no getting through to a guy like “Dollar Bill,” so it’s best to move on. We’ll give you updates as other B&B news comes in. Stay tuned to the CBS soap and don’t forget to check CDL often for the latest Bold and the Beautiful spoilers, updates, and news.