BY hellodrdavis on November 16, 2018 | Comments: 2 comments
Related : Soap Opera, Spoiler, Television, The Bold and the Beautiful 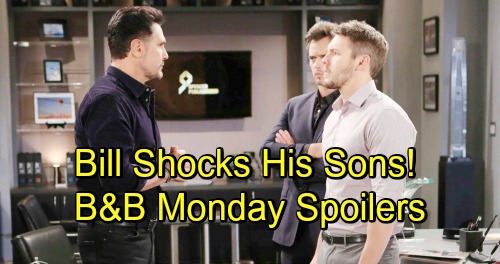 The Bold and the Beautiful spoilers for Monday, November 19, tease that Brooke (Katherine Kelly Lang) and Ridge (Thorsten Kaye) will meet up after Brooke’s private discussion with Bill (Don Diamont). Although Ridge is relieved that Bill is not going to the police about his judge tampering, he’s peeved that Bill seems to be doing everything he can to make nice with Brooke.

Ridge just doesn’t buy that Bill is now a changed man, as Bill claims. Rather, Ridge believes that Bill’s #1 motivation is to win Brooke back. And to Ridge’s horror, Brooke seems to be falling for Bill’s Mr. Nice Guy persona.

Ridge will naturally want to know what Brooke and Bill talked about during their conversation, and he’ll try to persuade Brooke that Bill is only doing what he’s doing in order to win her back. But chances are, Brooke won’t see it that way. In fact, she’ll probably defend Bill to Ridge yet again, which is only going to irritate Ridge more.

Meanwhile, on the new B&B episode on Monday, November 19, Bill will have a chat with Liam (Scott Clifton) and Wyatt (Darin Brooks). Liam and Wyatt were stunned to learn that their father was the victim of judge tampering but didn’t press charges, so they’ll probably want to discuss that with their dad.

But Bill will have other things on his mind. Bill has been giving a lot of thought lately to his sons’ legacy. Bill’s acted terribly in the past with respect to his sons’ inheritance. For example, earlier this year he dangled a fortune and “the keys to the kingdom” in front of Wyatt if Wyatt would do his dirty work.

But it looks like Bill will embrace unconditional love and will want to assure his sons that they will always be Spencers and heirs to the Spencer fortune, no matter where they decide to be employed or put their energies. It will be a touching moment for the three men and a great step toward healing.