BY hellodrdavis on November 21, 2018 | Comments: 2 comments
Related : Soap Opera, Spoiler, Television, The Bold and the Beautiful 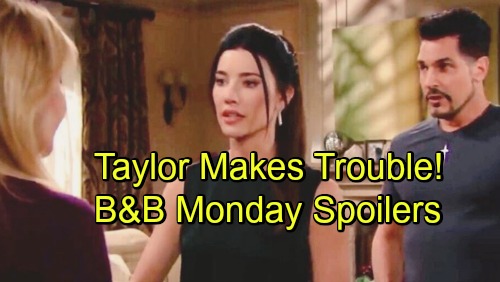 The Bold and the Beautiful spoilers for Monday, November 26, tease that Taylor (Hunter Tylo) will be back on canvas. She’ll likely be back to see Steffy (Jacqueline MacInnes Wood) and Kelly (Zoe Pennington) for a late Thanksgiving celebration. But Taylor will have some things on her mind other than celebrating.

Taylor will have a flashback to the night that she shot Bill (Don Diamont). She was all riled up that night about Bill and Steffy’s one-night stand and she assumed that Bill had preyed on Steffy. She shot Bill in cold blood, and the only reason she got away with it was because Bill promised Steffy that he wouldn’t press charges.

Of course, at the time it seemed that Bill would keep his promise, since he was obsessed with Steffy and would have done anything for her. But now Bill is all about Brooke (Katherine Kelly Lang), and Taylor will probably be worried that Bill won’t be motivated to keep her out of prison any longer. It’s a justifiable fear, and it will have Taylor anxious and distraught, in fact, by bothering Bill, her fears will cause trouble for Steffy.

Meanwhile, on the new B&B episode on Monday, November 26, Liam (Scott Clifton) and Brooke will have a chat. The topic of Bill will come up, and they’ll discuss Bill’s newfound change of character. Liam may want to get Brooke’s take on the changes Bill’s made in his life, since Brooke is the one who knows Bill the best.

After everything that Bill has done in the past to himself and to Brooke, Liam will marvel at Brooke’s faith in Bill. He may wonder how Brooke can be so sure that Bill has truly changed. Brooke will likely respond as she always does…that she can see how much Bill loves Will (Finnegan George) and how hard he’s working to be a better father.