The Bold and the Beautiful Spoilers: Pam and Donna’s Ruthless Takedown Mission – Plot the Destruction of Quinn’s Marriage to Eric

BY Heather Hughes on November 1, 2018 | Comments: one comment
Related : Soap Opera, Spoiler, Television, The Bold and the Beautiful 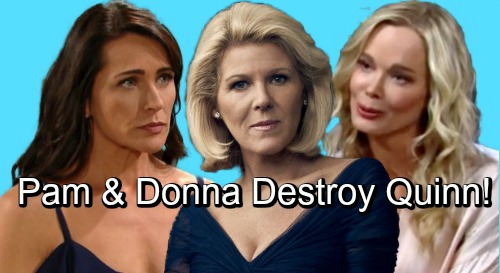 The Bold and the Beautiful (B&B) spoilers tease that Pam (Alley Mills) will put a plan in motion. She’s tired of being pushed around by Quinn (Rena Sofer), so she intends to fight back. Furthermore, Pam won’t allow her family legacy to be trashed. She’ll take Quinn’s complaints and behavior as an insult to Stephanie (Susan Flannery), so she won’t stand for that.

Of course, Quinn is a formidable foe. Going up against her won’t be easy and that’s why Pam will need some backup. The Bold and the Beautiful spoilers say Pam will join forces with Donna (Jennifer Gareis). These two have also faced conflict in the past, but they’ll choose to leave that as ancient history. Quinn’s current enemy number one, so they’ll stand together for a takedown mission.

The first step of this plot will be securing Donna’s new job. After Pam convinces Eric (John McCook) to hire Donna as a co-receptionist, she’ll be pretty pleased with herself. Next, Pam will try to push Donna in Eric’s direction. She’ll prey on Donna’s lingering love for Eric and try to stir up the desire for a reunion.

Pam will help Donna take a walk down memory lane. She’ll want Donna to see that she’s the far better match for Eric. It probably won’t take much work to make that happen! It’s clear that Donna still has feelings for her ex. She just has to accept how deep they are and admit she wants Eric back.

With Pam pulling the matchmaking strings, Eric and Donna’s bond will grow stronger. B&B spoilers say Quinn will be incredibly envious, which should thrill Pam. She’ll love the idea of watching Quinn’s marriage crumble. Pam will think it serves Quinn right for trying to derail her wedding to Charlie (Dick Christie).

Once she sees some hints of success, Pam will undoubtedly kick her scheme up another notch. Naturally, Quinn should realize what Pam’s game is sooner or later. Can she combat Pam and Donna’s combined threat? The Bold and the Beautiful fans won’t want to miss the intense battle ahead!

Which side are you rooting for in this B&B war? Are you on “Team Quinn” or would you rather see Donna and Pam achieve victory? We’ll give you updates as other news comes in. Stay tuned to the CBS soap and don’t forget to check CDL often for the latest Bold and the Beautiful spoilers, updates and news.