The Bold and the Beautiful Spoilers: Quinn and Eric’s Stunning Discovery – Sally and Wyatt Caught in Wild Passion 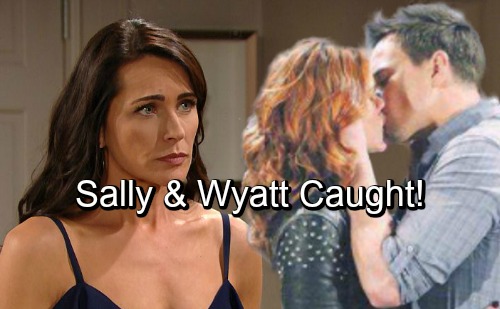 The Bold and the Beautiful (B&B) spoilers tease that Sally (Courtney Hope) will find a friend in Wyatt (Darin Brooks). Of course, it won’t take long for him to become something more! B&B fans can expect Sally and Wyatt to share a kiss soon enough. They’re both attractive, newly single people. There’s no reason they shouldn’t have a little fun. They’ve earned it after enduring so much heartache lately.

Wyatt and Sally won’t know exactly what they’re doing here, but they’ll at least know they appeal to each other. Neither one of them will be looking for anything serious at first. They’ll just want to enjoy making out and bonding. There’s no need to jump right into a relationship when they can just relax and have fun.

However, we all know B&B romances move fast. On this show, two characters can start dating and marry within a month! Lovebirds fall fast and hard, so Wyatt and Sally will undoubtedly be a hot couple before you know it. After Quinn (Rena Sofer) is brought in the loop on this romance, she’ll certainly fear the worst.

The trouble will start with a stunning discovery. During the week of June 25-29, Quinn and Eric (John McCook) will spot Wyatt kissing Sally. They’ll walk in on the make-out partners, so The Bold and the Beautiful viewers will see some awkward moments.

Quinn disapproves of nearly every love interest Wyatt happens to pick. There’s no reason to believe she’ll embrace this romance. Eric may have some reservations, too. He cares about Wyatt and he won’t want him to get hurt. Both Sally and Wyatt are on the rebound, so the potential for disaster is obvious.

Nevertheless, this is Wyatt’s life and he can choose to live it any way he wants. He’ll probably promise that he’s got everything under control. Wyatt should acknowledge their concerns, but he may point out that this is all very casual. If it becomes a real relationship, that’s great. If not, Wyatt might contend that he’s not going to sweat it.

Since Eric’s such an old softie, he’ll likely get on board. Eric fell for Quinn, so he has no business judging anybody else’s romantic choices. Quinn, on the other hand, could be a real problem. The Bold and the Beautiful spoilers hint that Sally had better watch out! We’ll give you updates as other B&B news comes in. Stick with the CBS soap and don’t forget to check CDL often for the latest Bold and the Beautiful spoilers, updates, and news.