The Bold and the Beautiful Spoilers: Quinn Panics Over Losing Eric – Confides Fears To Wyatt 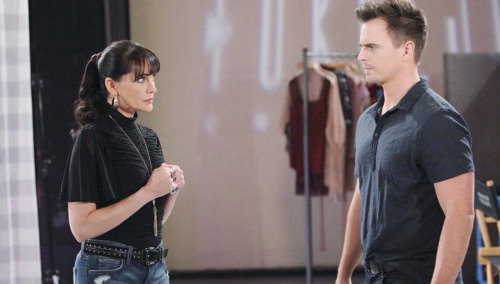 The Bold and the Beautiful spoilers tease that things are going to keep going downhill for Quinn (Rena Sofer) where her relationship with Eric (John McCook) is concerned. After months of apparently no conflict in their marriage, suddenly the pair is experiencing tension. And it all started with Pam’s (Alley Mills) request to get married at the Forrester estate.

Quinn might not have had a problem with the request, had it not been accompanied by the demand that Stephanie’s (Susan Flannery) portrait be reinstated and Quinn’s portrait taken down. Quinn feels undermined in her own home and has demanded that Eric rescind his offer for Pam and Charlie (Dick Christie) to get married at the estate.

But Eric is just as stubborn as Quinn, and it doesn’t look like he’s going to rescind the offer to Pam. That won’t sit well with Quinn, and she’ll start to feel paranoid about the status of her relationship with Eric. She feels like Pam is out to get her, and soon she’ll feel that others are, as well.

B&B spoilers say that Eric, Ridge (Thorsten Kaye), Brooke (Katherine Kelly Lang), Thorne (Ingo Rademacher), Katie (Heather Tom), and Donna (Jennifer Gareis) will soon meet up for dinner, and Quinn will feel like the odd woman out. It looks like she’ll be left out of the conversation, which will further flame her paranoia over her status in the family.

Quinn will be so upset about the current state of her marriage and status within the Forrester family that she’ll need a shoulder to cry on. She’ll lean on Wyatt (Darin Brooks) and share her concerns with him, and she’ll confess that she’s got a feeling that something or someone is out to ruin her relationship with Eric.

Unfortunately, it doesn’t look like things are going to get any easier for Quinn going forward. Donna will be becoming a more prominent force in Eric’s life, as she’ll soon take a receptionist position at Forrester. She’ll also do her best to remind Quinn that she and Eric have a romantic history. It’ll mean more stress for Quinn.

Do you think Quinn’s relationship with Eric is doomed? Stay tuned to the CBS soap and don’t forget to check CDL often for the latest Bold and the Beautiful spoilers, updates, and news.