The Bold and the Beautiful Spoilers: Rick and Nicole Hook Up, Bond Over Cheating Spouses 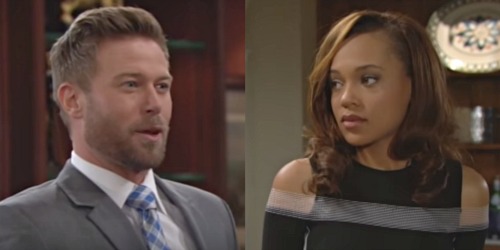 The Bold and the Beautiful (B&B) spoilers tease that big trouble could be brewing for two seemingly strong marriages. Maya (Karla Mosley) and Rick (Jacob Young) are on solid ground for now, but Carter’s (Lawrence Saint-Victor) latest bombshell could change things. He made it clear that if Maya ever became unhappy with her current situation, she still had him as an option.

Now that Carter has shared his feelings, there’s no taking them back. Carter may even make other efforts to pursue Maya. Whether she falls for him again or not, Rick could easily get suspicious. B&B might rely on the classic misunderstanding trope.

Rick could overhear or see something that leads him to believe Maya’s cheating with Carter. It may not be true, but it could be enough to convince Rick to cheat in retaliation. Rick could seek comfort and refuse to feel guilty about it.

Who could Rick turn to in his darkest moment? Nicole (Reign Edwards) might be a good fit. The destruction of her marriage is probably already in progress. The Bold and the Beautiful mentioned that Nicole and Zende (Rome Flynn) haven’t been spending much time together. Work’s getting in the way and that could mean bad news for their previously close bond.

Zende has been unable to resist temptation before, so he may end up in bed with some beautiful Parisian girl. That’d be a great setup for Rick and Nicole’s fling. They could connect over a deep sense of betrayal.

Again, that may not be the full story in Rick’s case. Since Maya’s transgender, B&B might be wary of painting her in a poor light. They’ve been careful to show Maya as a resilient, strong woman since the truth came out. If there’s cheating coming, it makes sense that it’ll be on Rick’s end after some tragic confusion.

It looked like the show might be headed in this direction before Rome Flynn’s departure. They probably took some time to regroup and swapped Carter in for Zende in this storyline. That explains why Carter’s feelings are suddenly resurfacing.

Since Nicole and Rick are Lizzie’s biological parents, that’s something else that could bring them together. The Bold and the Beautiful spoilers suggest that major drama’s coming up, so stay tuned. We’ll give you updates as other B&B details emerge. Stick with the CBS soap and don’t forget to check CDL often for the latest Bold and the Beautiful spoilers, updates and news.