The Bold and the Beautiful Spoilers: Ridge Threatens Bill’s Life – Brooke Fears Raging Hubby Will Land Back in Jail

BY Heather Hughes on April 6, 2018 | Comments: one comment
Related : Soap Opera, Spoiler, Television, The Bold and the Beautiful 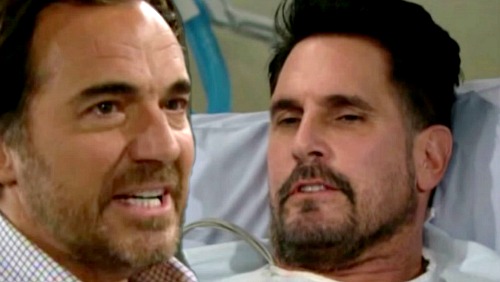 The Bold and the Beautiful (B&B) spoilers tease that Ridge (Thorsten Kaye) and Bill’s (Don Diamont) feud will intensify. It’s nice that Bill cleared Ridge’s name, but he obviously doesn’t deserve a medal or anything. After all, it was Bill’s unfair accusations that landed Ridge behind bars in the first place. Ridge still considers Bill his worst enemy, so the conflict will continue to rev up.

Next week, Hope (Annika Noelle) will try to rattle Steffy (Jacqueline MacInnes Wood) a bit. She’ll suggest that Bill’s still doing everything he can to be with Steffy. Hope may argue that Bill’s going to wear Steffy down eventually. She’ll probably be convinced that Steffy and Bill only know how to bring pain.

Steffy may consider Hope her biggest problem since she clearly has deep feelings for Liam (Scott Clifton). However, she could start to wonder if Bill really will cause more trouble. Steffy might pass Hope’s comments along to Ridge and inadvertently get him riled up. Regardless, Ridge’s anger will definitely grow stronger soon. He’ll feel like his family is never going to be rid of Bill’s drama.

The Bold and the Beautiful spoilers say Ridge will eventually lash out as his enemy. He’ll spark another fierce confrontation, which probably isn’t the best plan right now. Ridge just got off the hook on attempted murder charges! The last thing he should be doing is provoking his adversary and setting up more potential violence.

Nevertheless, Ridge will get in Bill’s face and start making vicious threats. He’ll contend that Bill needs to stay away from Steffy. In fact, Ridge might tell Bill to leave the whole Forrester clan alone. He’ll add that if Bill can’t learn how to back off, he’ll make him regret it. Ridge will suggest that Bill cheated death once, but he may not do it again.

When Brooke (Katherine Kelly Lang) gets updates on their fight, she’ll naturally be concerned. B&B spoilers say Brooke will offer her husband a stern warning. She’ll insist that Ridge needs to back off, too. Brooke will fear that Ridge’s rage will lead to behavior that could put him back in jail – on legitimate charges this time!