The Bold and the Beautiful Spoilers: Sally Returns For Fierce Mission, Determined Spectra Fights for What She Wants

BY Heather Hughes on September 4, 2018 | Comments: one comment
Related : Soap Opera, Spoiler, Television, The Bold and the Beautiful 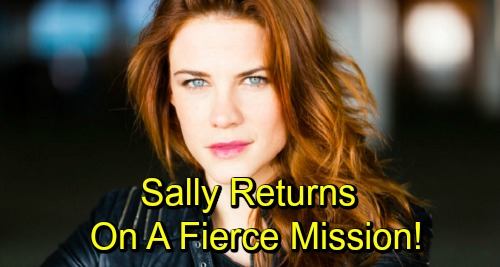 The Bold and the Beautiful (B&B) spoilers tease that Sally (Courtney Hope) will get back in the action pretty soon. Her return stints started off on an explosive note when she nearly shot Wyatt (Darin Brooks)! Fortunately, Cupid’s arrow struck him instead and now this couple’s going strong. B&B fans can expect their relationship to deepen this fall. Wyatt and Sally will remain an ideal fit.

Of course, there are some good reasons why these two work. Both of them have been burned in intense romances, so they feel like kindred spirits. However, there’s more to it than that. Wyatt tends to fall fast and hard, so he needed someone who would do the same. It didn’t take Sally long to return Wyatt’s feelings and decide she was all in on this.

As for Sally, she needed someone she could consistently count on. Thomas (Pierson Fode) was flaky in the end, so that relationship didn’t pan out. Sally never really had a shot with Liam (Scott Clifton). He’s got enough on his plate with Hope (Annika Noelle), Steffy (Jacqueline MacInnes Wood) and all the babies he keeps making.

Sally’s better off with a guy like Wyatt, who’s less fickle and more devoted. He’s not the perfect man, but he knows how to treat a girl right. The Bold and the Beautiful spoilers hint that it’ll be smooth sailing for “Wally” this fall. Wyatt will be there for Sally as she sinks her teeth into Forrester work. After she’s had a little time to prove herself, Sally could earn more responsibilities as well as some respect.

Since we know Ridge (Thorsten Kaye) will have to cut one line at FC, that means either Steffy or Hope will face disappointment. Even if Hope’s the loser and her line disappears, there’ll surely be something for Sally to do at the company.

However, there’s still a chance that Hope will win this battle. If so, she’ll have to step up her game and prove Ridge made the right call. That could give Sally an opportunity to step up as well. Nevertheless, this redhead has a sneaky side. Will she be forced to rely on it down the road? At some point, it’s possible Sally will use Hope or Steffy’s struggles to get ahead.

That could be the first sign of drama for Sally and Wyatt, but B&B viewers will just have to wait and see! The Bold and the Beautiful spoilers state that some great material’s coming up no matter what, so we’ll give you updates as other B&B news comes in. Stick with the CBS soap and don’t forget to check CDL often for the latest Bold and the Beautiful spoilers, updates, and news.