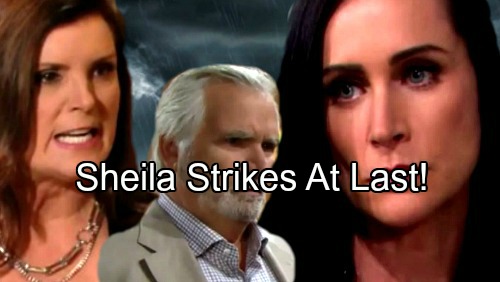 The Bold and the Beautiful (B&B) spoilers tease that Quinn (Rena Sofer) should be afraid – VERY afraid! It’s been a while since we’ve heard from Sheila (Kimberlin Brown) and that’s exactly the way Quinn likes it. No news is good news in her book. Eric (John McCook) also feels certain that their Sheila troubles are over. Quinn and Eric’s marriage is back on track, so they’re in total bliss.

Of course, the happy couple is quite mistaken. Sheila’s silence could be even worse than her constant pestering. At least Sheila was busy with brawls and massage experts before. Now Sheila has plenty of time on her hands and she’s no doubt using it to plot against Quinn. 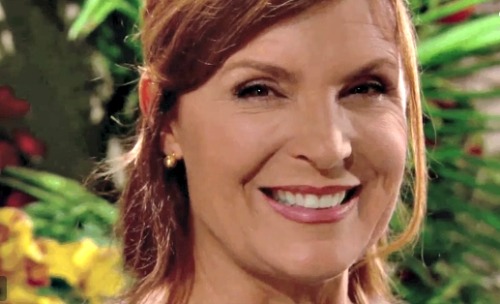 Sheila could still be hung up on her goal of becoming the Forrester matriarch. Sheila was awfully determined, so she may be unwilling to drop that plan. However, there’s another option and it’s just as terrible. Sheila could target both Eric and Quinn as part of her revenge strategy.

Regardless, Quinn will remain the one Sheila wants to destroy the most. Sheila thinks Eric’s been brainwashed into standing against her. She may think she could change Eric if she gets Quinn out of the way. Even if she can’t, Sheila might have the backup plan of making Eric suffer as well. 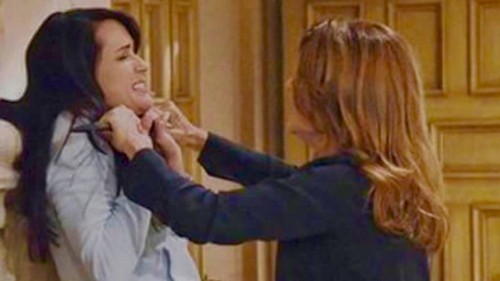 The Bold and the Beautiful is definitely giving Sheila plenty of time to scheme. Once the Steffy (Jacqueline MacInnes Wood) and Bill (Don Diamont) drama dies down, Sheila could be ready to strike. B&B likes to mix it up every few months, so they’ll need a major story shift.

Plus, they don’t seem to have much use for Sheila anymore. The show may put her exit storyline in motion down the road. Kimberlin Brown plans on running for congress anyway, so she’ll still have something to keep her busy.

The Bold and the Beautiful spoilers say Quinn and Sheila could ultimately fight to the death. Since Quinn probably isn’t going anywhere, Sheila may be the one who faces a grim fate. Will B&B deliver a deadly shocker? We’ll give you updates as other details emerge. Stay tuned to the CBS soap and don’t forget to check CDL often for the latest Bold and the Beautiful spoilers, updates and news.