The Bold and the Beautiful Spoilers: Steffy Calls Out Ridge – Questions His Motives For Supporting Katie’s Custody Case

BY hellodrdavis on September 9, 2018 | Comments: one comment
Related : Soap Opera, Spoiler, Television, The Bold and the Beautiful 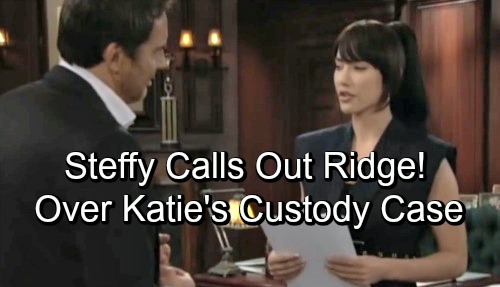 The Bold and the Beautiful spoilers tease that Ridge (Thorsten Kaye) will really be in the hot seat. He’s got a major decision on his hands – choosing between Hope’s (Annika Noelle) Hope For The Future (HFTF) Line and Steffy’s (Jacqueline MacInnes Wood) Intimates Line. He’s getting pressure from Brooke (Katherine Kelly Lang) to choose HFTF and pressure from Steffy to choose Intimates.

But Steffy’s going to be laying on some additional pressure to Ridge as well. As viewers know, Ridge and Thorne (Ingo Rademacher) are squarely behind Katie (Heather Tom) in her custody battle against Bill (Don Diamont). In fact, one could argue that Ridge and Thorne orchestrated the lawsuit. They were (and in many ways still are) more into it than Katie seems to be!

Ridge has despised Bill for a long time, but recently Ridge’s dislike for Bill reached a new level. Bill’s meddling in Liam (Scott Clifton) and Steffy’s marriage was one thing, but his obsessing over Steffy and trying to become her husband really irked Ridge. The thought of his daughter with Bill enrages Ridge, to say the least.

Steffy, of course, knows all of this, and she knows that Ridge is likely using Katie’s custody case as a way of getting revenge on Bill. Ridge says it’s all about what’s best for Will (Finnegan George), but Steffy can see through what Ridge is doing. She’ll call him out on his true motives and urge him to at least be honest about what he’s doing.

Steffy may even urge Ridge to reconsider his opinion, given that she has a soft spot for Bill. But it’s unlikely that Ridge will change his mind, and he and Thorne will likely keep at Katie to go after Bill with everything she’s got.

Do you think that Steffy’s callout of Ridge will cause any change in Ridge’s behavior? Stay tuned to the CBS soap and don’t forget to check CDL often for the latest Bold and the Beautiful spoilers, updates, and news.