The Bold and the Beautiful Spoilers: Unexpected Storyline Twist Hurts Brooke and Hope – Steffy Chooses Kelly and Herself

BY Sean O'Brien on August 1, 2018 | Comments: one comment
Related : Soap Opera, Spoiler, Television, The Bold and the Beautiful 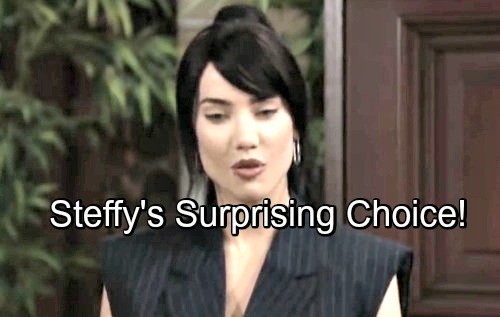 The Bold and the Beautiful spoilers documented the triangle that involves Steffy (Jacqueline MacInnes Wood), Liam (Scott Clifton), and Dollar Bill (Don Diamont). B&B’s unexpected storyline twist now sees Steffy not choosing Bill over Liam, as she originally intended, but instead choosing herself.

Some could call Steffy selfish for what she’s doing. Others would say she represents an empowered, modern woman. But actually both tags would be condescending. Neither person would be an expert on Steffy, which makes Bill’s selfless act rather impressive. He opted not to be a mind reader, which the love of his life deeply appreciated, along with the sincerity he expressed in wanting to care for Kelly.

Bill couldn’t have been written against his own character any more than he was within the last week. Diamont’s alter ego behaves in a completely different way whenever he even speaks about Steffy. When he’s with her, Bill is a very different man. That’s one of the reasons that made the potential of Still actually coming into existence very intriguing.

Who Steffy would become and how would all impacted Los Angeles personas react? Those other equally fascinating points to ponder have at least been shelved for the summer. Unless, of course, Bill is Kelly’s father. But let’s save that ongoing analysis for a future digital feature.

Sure, Bill wants to marry Steffy and he’s now prepared to wait her out. But he does seem to recognize that might not happen for awhile, though he doesn’t think his chance has passed. Still (wink), Bill gave Steffy all the Forrester Creations stock shares with, “No strings attached.”, to directly quote his words. That was impressive and again reaffirmed that the man does actual love his son’s ex-wife.

Steffy is wise in not leaping into another marriage commitment so soon after learning about Liam’s latest betrayal. Having had approximately a few days, in soap time, to digest all that’s happened, Steffy withdrew her agreement to marry Bill. At the same time she also said that she’s not going back to Liam.

While the Still marriage plan felt rushed, this development feels normal. One part of solid soap is veering somewhat close to normal life so viewers can maintain a plausible believability stance.

So, assuming Steffy’s plan holds, relief is about to be projected across B&B’s fictional world. Well, Hope (Annika Noelle) and Brooke (Katherine Kelly Lang) might not feel that way. But they weren’t part of Steffy’s decision.