The Bold and the Beautiful Spoilers: Steffy Finds a Sexy New Man, There’s Life After Liam – Next Romance Brings Jealousy and Drama 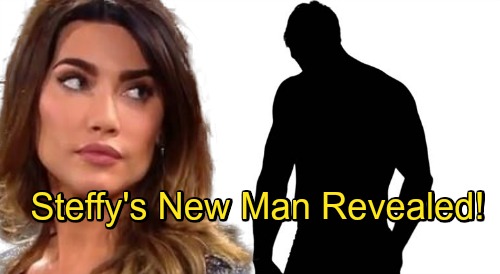 The Bold and the Beautiful (B&B) spoilers tease that Steffy (Jacqueline MacInnes Wood) will try to put Liam (Scott Clifton) in the rearview mirror. He’ll commit to Hope (Annika Noelle) next week, which should seal the deal on Steffy’s choice – at least for now. She can take some time for herself while Liam and Hope plan their nuptials.

Of course, Steffy isn’t interested in Bill (Don Diamont) either. She just doesn’t feel that same spark that he does, so he’ll have to move on. Steffy intends to concentrate on Kelly and her career, but B&B may not let her stay single for long. She’s got a lot to offer some lucky guy, so they might as well put her in a new romance soon. Who will Steffy end up with next?

It hasn’t been that long since Wyatt (Darin Brooks) and Sally (Courtney Hope) got together, so The Bold and the Beautiful will probably stick with that pairing.

That probably rules out Wyatt, which is good since they’ve already been down that road before. Steffy never seemed to care about Wyatt quite as much as she should. There’s no point in breaking his heart all over again.

With that in mind, we should mull over other options. Steffy needs a fresh start with someone outside of the Spencer family. Carter (Lawrence Saint-Victor) might be a possibility to consider.

Anytime Saint-Victor does an interview, people tend to ask him who he’d like for Carter’s love interest. Steffy is his go-to answer, so you can bet Saint-Victor would love a Carter-Steffy storyline.

Detective Alex Sanchez (Jeremy Ray Valdez) is someone else to think about. Some Bold and the Beautiful fans have tossed around the idea on social media. It might be intriguing, especially if Sanchez finally figures out that Steffy’s mom shot Bill. Would he protect Taylor (Hunter Tylo) for Steffy’s sake or blow up his relationship by seeking justice?

The Bikini Bar also has a handsome bartender now. Keith Carlos has been popping up in the recurring role of Danny, so we shouldn’t count him out. Maybe Steffy they could have a little fun at some point.

If Steffy has something else in mind, she could always turn to a Forrester Creations model. Word has it some sexy new men will be parading themselves around soon. Since Steffy’s single and ready to mingle, she might respond to some flirting and hook up with one of them. It could be a one-time deal or turn into something more meaningful.

Bottom line, Steffy deserves the chance to spread her wings and move beyond Liam. As a bonus, her next hunk could make Liam insanely jealous and keep the story moving. Liam could be chasing after Steffy again before you know it.