BY Heather Hughes on October 18, 2018 | Comments: one comment
Related : Soap Opera, Spoiler, Television, The Bold and the Beautiful 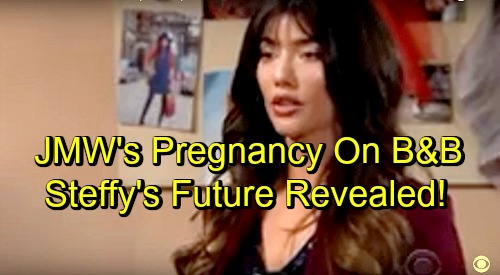 The Bold and the Beautiful (B&B) spoilers tease that Steffy’s (Jacqueline MacInnes Wood) new path could come with some interesting twists and turns. Ever since her breakup with Liam (Scott Clifton), Steffy’s been focused on her career and her new daughter. She seemingly hasn’t had the desire to date anyone else.

Part of Steffy may still need time to get over Liam and find her own way. Another part of her is probably feeling so burned that she wants to concentrate solely on Forrester. Steffy may not know how to succeed in love, but she knows how to succeed in business. She’ll keep putting everything she’s got into her intimates line, but there’ll be some hurdles as this storyline progresses.

Steffy won’t give up on her dreams, so she’ll hopefully achieve everything she wants in the end. Will she eventually complete her career goals and put herself back out there romantically? Will Steffy open her heart once more and learn to love again? B&B can’t keep Steffy single forever. That’s just not how it works for a leading lady in the soap world.

However, there’s an offscreen factor that could affect what the show does on screen. It’s actually great news! Jacqueline MacInnes Wood recently announced her pregnancy, which was something many fans were starting to suspect. Viewers had been piping up on social media about the possibility that Wood had a baby bump. It seemed like The Bold and the Beautiful was already trying to conceal it.

It turns out Wood’s five and a half months along, so it’s too late to work it in as a story element. Her pregnancy overlapped with Steffy’s recent one anyway! In an interview with Entertainment Tonight, Wood explained how the show would handle all this. She said we’ll see “Steffy holding things, Steffy behind desks…” Wood added that she’s game for whatever they want to throw at her.

Still, this could affect Steffy’s work as a model for the intimates line. It could also affect how they use the character in the coming months. Will they avoid putting Steffy in another substantial story? Wood will need maternity leave later, so that’s something to take into consideration.

Karla Mosley wasn’t given a ton of material as Maya in the months leading up to her own maternity leave. She eventually dropped off the map so Mosley could give birth and spend time with her new little one. Steffy tends to play a far bigger role on B&B though. The Bold and the Beautiful may need to come up with a real exit until she can get back in the action.

Steffy could go out of town on business for a while. They could also take the “tragic accident puts her in a coma” route, which is what’s coming up for Bill (Don Diamont) next week. Whatever the case, The Bold and the Beautiful spoilers say some adjustments will need to be made. Steffy will remain part of the drama for now, but we’ll see how things play out down the road.

Are you anxious to see what’s next for Steffy? What do you want her future to look like? We’ll give you updates as other details emerge. Stay tuned to the CBS soap and don’t forget to check CDL often for the latest Bold and the Beautiful spoilers, updates and news.