BY hellodrdavis on August 12, 2018 | Comments: 3 comments
Related : Soap Opera, Spoiler, Television, The Bold and the Beautiful 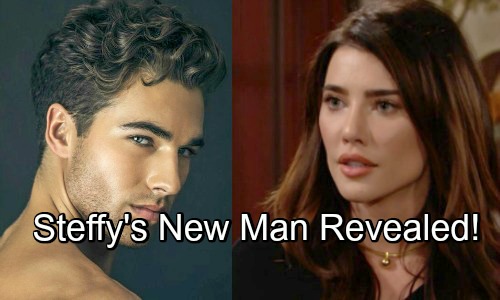 The Bold and the Beautiful spoilers tease that Steffy (Jacqueline MacInnes Wood) will be undergoing some big changes. She’s removed herself from the love triangle with Liam (Scott Clifton) and Hope (Annika Noelle) to start over fresh, and she’s got some big plans in the works at Forrester.

Chances are, work and taking care of Kelly will occupy most of Steffy’s time. She’s going to unveil her new business plan and shake things up at Forrester with her fresh, new ideas. She’s even going to jump right in and serve as a model for The Bedroom Line reboot.

And that’s going to put her face-to-face with some of the hottest men in Los Angeles…the Forrester models. There’s one model in particular who’s been getting some buzz as a potential love interest for Steffy, and that’s Nic Palladino, the 24-year-old professional model who has joined B&B’s cast as a model for Forrester Creations.

Nic’s recently been on set modeling pieces from The Bedroom Line. The extent to which Nic’s character interacts with Steffy remains to be seen, but since Steffy will be modeling, too, it makes sense that the two of them would have some scenes together.

It may seem a bit soon for Steffy to move on to someone new, but things tend to move pretty fast on B&B. Besides, Steffy doesn’t necessarily need to have a full-fledged affair right now. Nic’s character could simply catch Steffy’s eye and remind her that there are more fish in the sea. It would be nice to see Steffy at least acknowledge that there are other men out there besides Liam and Bill (Don Diamont).

Nic’s character may also serve to stir up some jealousy where Liam and Bill are concerned. It would be fun to watch Steffy interact with a new hunky man while Liam and Bill seethe with jealousy. It could even cause some problems between Liam and Hope if Liam gets too interested in Steffy’s romantic business!

Do you think that Nic will be Steffy’s new man? Stay tuned to the CBS soap and don’t forget to check CDL often for the latest Bold and the Beautiful spoilers, updates, and news.