The Bold and the Beautiful Spoilers: Suspicious Ridge Grills Bill – Maya Has Bad News for Thorne – Steffy Opens Up to Brooke

BY Marcy Cohen on January 17, 2018 | Comments: one comment
Related : Soap Opera, Spoiler, Television, The Bold and the Beautiful 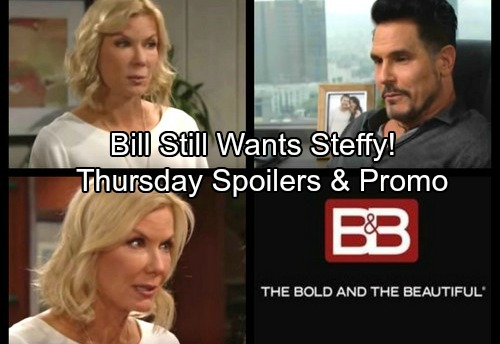 The Bold and the Beautiful (B&B) spoilers for Thursday, January 18, tease that Brooke (Katherine Kelly Lang) will struggle to understand what happened. Steffy (Jacqueline MacInnes Wood) just revealed that Liam (Scott Clifton) walked out on their marriage. Brooke will naturally be curious how it all went downhill so fast. She’ll have a hard time prying the details out of Steffy.

Brooke will point out that she’s never seen Steffy like this before. B&B fans can tell that Steffy’s in bad shape. She doesn’t know what to do with herself now that she’s pregnant and alone. Bill (Don Diamont) has offered to be there for Steffy, but he’s not the Spencer she wants by her side. Steffy will continue to pine for Liam, but he won’t care that she’s suffering. 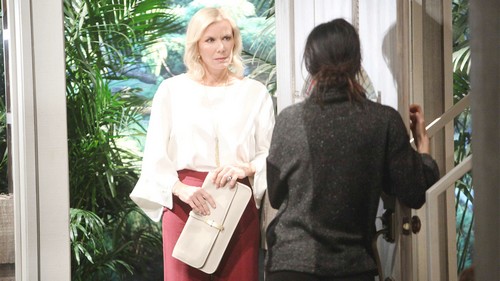 As for Brooke, she may or may not leave with the whole story. Regardless, Steffy will open up somewhat and Brooke will give updates to Ridge (Thorsten Kaye) later. She’ll be careful about how much she divulges. Brooke will contend that Steffy’s just not in a good place right now. Ridge will hate to hear that his daughter’s in pain. He’ll have a chat with Steffy on Friday to see if he can help.

The Bold and the Beautiful spoilers say Steffy will confess everything to Ridge soon enough, but he’ll focus on Bill for now. At Spencer Publications, Ridge will try to get to the bottom of a mystery. He’ll wonder why Bill was so quick to sign the annulment papers. Ridge suspects that Bill has an ulterior motive, so he’ll urge his rival to come clean. 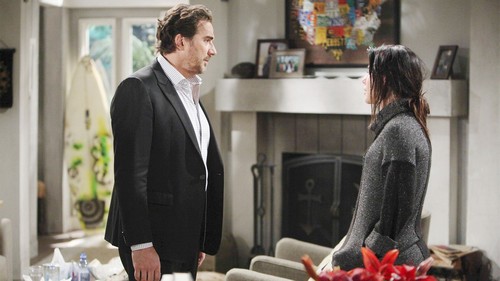 Bill will insist that he just thought it was the right call. He’ll contend that there’s no point in staying married to a woman who’s sleeping with Ridge. Bill may add that Brooke’s part of his past. They now lead very different lives, so he’ll suggest that the annulment was for the best.

Bill doesn’t want to hold Brooke back and he doesn’t want her holding him back either. Deep down, Bill still must believe a future with Steffy is an option. Justin (Aaron D. Spears) will feed Bill’s desires in Thursday’s episode. He believes Bill’s dreams could actually come true. 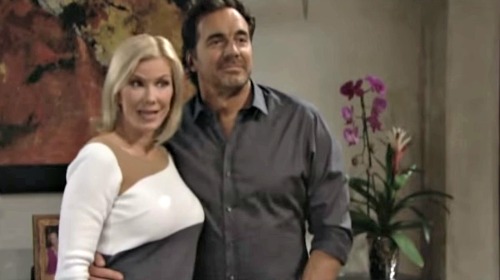 Elsewhere, Maya (Karla Mosley) will give Thorne (Ingo Rademacher) bad news. She’ll share that Ridge and Brooke’s wedding is moving forward. The Bold and the Beautiful spoilers say Thorne will have to deal with both rage and heartache.

It looks like some great scenes are coming up. We’ll keep you posted as other B&B details emerge. Stick with the CBS soap and don’t forget to check CDL often for the latest Bold and the Beautiful spoilers, updates and news.