The Bold and the Beautiful Spoilers: Taylor Returns To Finish Bill Spencer Off, Shoots To Kill! 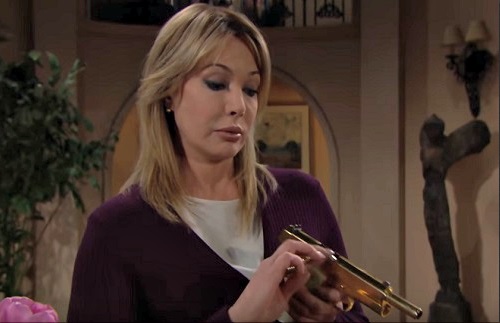 The Bold and the Beautiful spoilers tease that Taylor (Hunter Tylo) hobbled into Bill’s (Don Diamont) palatial estate that’s set in the hills of Los Angeles. Yes, Mama Bear is back!

Steffy (Jacqueline MacInnes Wood) was taken advantage of by Bill. That’s what Taylor believes. Since she’s a psychologist, her feelings must be fact. That was the implied message written between the lines of dialogue Tylo and Diamont exchanged.

Some may see a problem with Taylor’s use of emotional logic. First, she’s Steffy’s mother through Ridge (Thorsten Kaye). Second, she witnessed nothing. That means she didn’t base her conclusion on evidence, but instead personal, projected conjecture. However, she’s not wrong.

To be clear, Bill is a wolf. He’s never worn sheep’s clothes and never will. 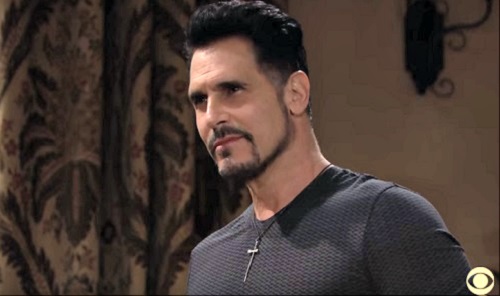 It also must be added that Steffy was fully vulnerable the night Bill tracked her down at the Forrester guest house. Yes, she didn’t have to give into him, but in that moment she was psychologically wrecked and therefore wasn’t thinking straight. Yes, that term was used to transition back to her mom, Taylor.

Ridge is doing all he can to apply pressure to Bill. He does not want to allow Steffy from somehow winding up with Spencer, who could be her only option if Liam (Scott Clifton) opts to fulfill his promise to end Leffy.

So, what does Ridge expect regarding Taylor’s influence? Well, for one, she’ll advocate for Steffy and, like she initially did, stay all over Bill.

Brooke (Katherine Kelly Lang) has been helpful and she did affect Bill while they were married. As B&B fans know, they are married no longer. No ring, no control.

While Ridge does love Brooke, he knows that she doesn’t hold power over Bill. One of his former loves (mostly when he looked like Ron Moss, wink), Taylor, isn’t a current romantic interest. But she’s fierce and will be an asset in this ongoing battle against Dollar Bill.

Poor Liam’s mother died years ago. His terrible father, Bill, just offered ongoing freedom in return for releasing Steffy forever. So Liam will also benefit from Taylor’s presence, as she can serve as a mother-figure.

The return of this B&B stalwart was shocking in all the right ways. Taylor always brought the heat to daytime and Tylo retains a daytime star’s aura.

Ridge’s instincts are right. He’s teamed with Steffy’s other parent to battle Bill. Thankfully, Wood’s character hasn’t given up on Liam. So this struggling wife and expectant mother will be open to her own mother’s help. With that odds have at least improved for Leffy, or at least for Steffy this spring.