The Bold and the Beautiful Spoilers: Taylor’s Freedom Hangs In The Balance – Will Brooke and Hope Turn Taylor In For Shooting Bill?

BY hellodrdavis on December 3, 2018 | Comments: 2 comments
Related : Soap Opera, Spoiler, Television, The Bold and the Beautiful 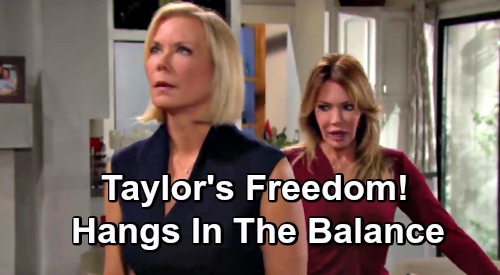 The Bold and the Beautiful spoilers tease that Taylor (Hunter Tylo) may have a lot to worry about in the coming days. She’s already on edge about Bill (Don Diamont) possibly turning her in for shooting him earlier this year, but Steffy (Jacqueline MacInnes Wood) has assured her that if she plays it cool and lays low, she’ll likely stay in the clear.

Taylor thinks that the only people who know about her crime are Bill, Steffy, and Liam (Scott Clifton). Taylor has no idea that Liam decided to spill the beans about the shooting to Hope (Annika Noelle), and that Hope immediately told Brooke (Katherine Kelly Lang) the news as well.

Now that Hope and Brooke know about the shooting, one must wonder whether either of them will end up turning Taylor in to the police. For Hope, the decision would probably be all about protecting her mother or her unborn baby. Hope seems genuinely concerned about Taylor’s mental stability and the likelihood that Taylor could snap again.

But Brooke’s a different story. Brooke probably doesn’t see Taylor as a real danger in the way the Hope does. Rather, she sees Taylor as an annoyance and a rival. She may want Taylor turned in, but according to B&B spoilers, she’ll want to talk to Bill about the situation first. And after Bill tells her that he has no plan to turn Taylor in, Brooke will likely relent to keep the secret as well…for Bill’s sake.

So, it seems that Hope will probably be the more likely person to turn Taylor in. But if she does, you can bet that it will start World War III between herself and Steffy. It’s hard to imagine just how damaged the relationship between Hope and Steffy would be if Hope turned Steffy’s mother in for shooting Bill, especially when Bill was all set to keep the secret for life.

Do you think Hope or Brooke (or both!) will end up turning Taylor in? Stay tuned to the CBS soap and don’t forget to check CDL often for the latest Bold and the Beautiful spoilers, updates, and news.