The Bold and the Beautiful Spoilers: Thorsten Kaye Weighs In on Hope and Steffy’s Future – What Ridge Really Thinks 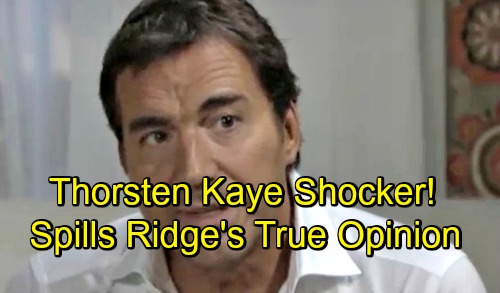 The Bold and the Beautiful (B&B) spoilers tease that Steffy’s (Jacqueline MacInnes Wood) intimates line will continue to cause drama. Emma (Nia Sioux) will have a big problem with Xander (Adain Bradley) and Zoe’s (Kiara Barnes) working relationship. Xander will insist that they’re simply team players with a history, but it’s the history part that Emma’s afraid of. She’ll worry that they’re starting to reconnect.

Steffy may have to intervene if this conflict gets out of hand. Of course, she’ll face more hostility from Hope (Annika Noelle) as well. Hope’s still upset about her line taking a backseat to Steffy’s. As Steffy achieves great success, it should rev up Hope’s jealousy and spark additional confrontations. In other words, don’t expect Hope and Steffy’s feud to end anytime soon.

Despite being in agreement on the custody case, these rivals just can’t get along when it comes to business. Of course, Liam (Scott Clifton) will always be an issue under the surface. They had somehow managed to reach a good place before Ridge (Thorsten Kaye) blew everything up. Sadly, it seems like there’s no hope for true reconciliation now.

Is Ridge truly to blame for that? In a new interview with Soap Opera Digest, Thorsten Kaye spoke out about the monsters Ridge may have created. It wasn’t Ridge’s intention to stir the pot, but B&B viewers know he certainly did.

Ridge tried to focus on the business aspect of things, but Kaye eventually admitted it was hard. Since Ridge wants to protect Steffy as a dad, it’s clear where his loyalties lie. Kaye suggested it wasn’t exactly personal, “but it’s tough to separate business and family. You are always a father or mother first, and after that comes whatever your professional commitments are.”

However, Kaye also took a jab at Hope for the Future! He argued that for Ridge, maybe Hope’s line just couldn’t measure up to Steffy’s intimates collection. “Ridge just felt that sleek and shiny were better than free scarves and whatnot,” Kaye said.

Nevertheless, Hope and Brooke (Katherine Kelly Lang) will remain agitated. Since Brooke’s on Bill’s (Don Diamont) side in the custody war, that’ll add to strain on her marriage. Brooke’s on the verge of finding out that Ridge pressured Judge McMullen (Joe Lando), so their relationship will take a serious hit.

Will Steffy and Hope’s conflict get worse, too? The Bold and the Beautiful spoilers say some fashion show chaos will erupt down the road. It could widen the rift and leave Ridge wishing he’d just come up with more money!