The Bold and the Beautiful Spoilers: Thursday, February 22 – Sally and Bill Face Off – Quinn Gets Great News – Katie Struggles

BY Heather Hughes on February 21, 2018 | Comments: one comment
Related : Soap Opera, Spoiler, Television, The Bold and the Beautiful 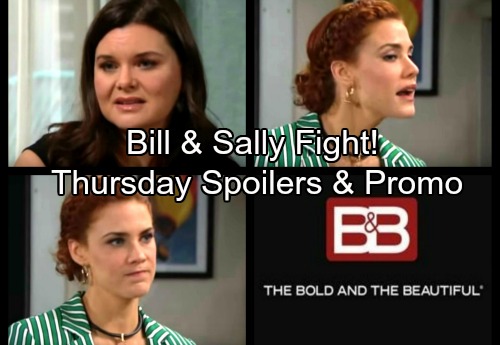 The Bold and the Beautiful (B&B) spoilers for Thursday, February 22, tease that Sally (Courtney Hope) will stop by Bill’s (Don Diamont) office. She’ll have a few things she wants to address. Sally will mention that Liam’s (Scott Clifton) a bit preoccupied these days. She’ll think that means she needs to start dealing directly with Bill.

Sally will try to keep her cool as she brings up Spectra Fashions. She’ll believe they should talk about rebuilding her business like Bill promised. Sally’s company faced plenty of drama thanks to Bill, so she’ll insist that he should make it right. 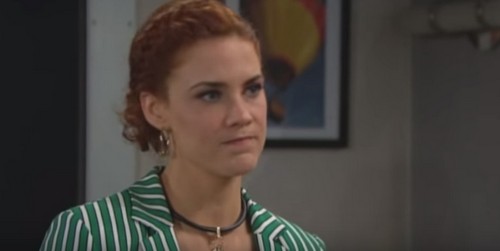 Naturally, Bill won’t be too keen on sinking money into this project. He doesn’t like to throw it around unless it benefits him. Besides, Bill may argue that Sally’s to blame for Liam’s crumbling marriage. He could bring up the kiss and suggest that Sally deserves nothing.

Of course, Sally was only in the rubble with Liam because of Bill’s blast. She certainly didn’t force Steffy (Jacqueline MacInnes Wood) to cheat either. It looks like a major faceoff is coming up. By the end of the week, Sally will make some vicious threats.

In the meantime, B&B fans will see Katie (Heather Tom) struggle. She still won’t understand Wyatt’s (Darin Brooks) sudden decision to break up with her. Perhaps Katie will open up to Brooke (Katherine Kelly Lang) about all of this. They’ll ponder why Wyatt dumped Katie right after the wedding.

Maybe they can put their thinking caps on and figure out that Wyatt must’ve seen the kiss. He was crushed by that lip lock between Katie and Thorne (Ingo Rademacher). Elsewhere, The Bold and the Beautiful spoilers say Wyatt will confide in his mom. Quinn (Rena Sofer) will secretly be ecstatic over the breakup, but she’ll offer comfort anyway. She always wants to be there for her baby boy.