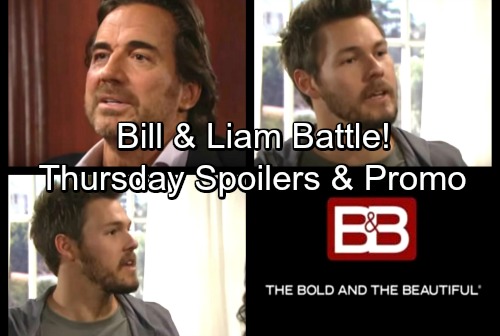 The Bold and the Beautiful (B&B) spoilers for Thursday, March 22, tease that Bill (Don Diamont) will be prepared to identify the person who shot him. However, there could be a bit of a delay. It looks like Bill might get sidetracked by a fight with Liam (Scott Clifton).

B&B fans know that Liam recently found out about Bill’s proposal to Steffy (Jacqueline MacInnes Wood). He was actually inching toward forgiveness, but this shocking news destroyed any sympathy he had for his dad. Liam isn’t a monster, so he’ll probably suggest that he’s glad Bill survived. However, Liam will also want to get a few things straight with his old man. 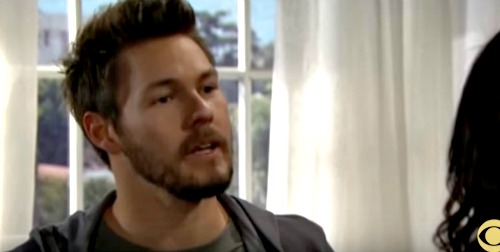 The Bold and the Beautiful spoilers say Liam will object to Bill’s continued pursuit of Steffy. He’ll wonder what Bill was thinking. Liam’s starting to believe Bill’s incapable of change or any kind of decency. Bill’s still weak in that hospital bed, but that won’t stop Liam from ripping into him.

Liam and Bill’s confrontation will be pretty intense on Thursday. They’ll both spew some vicious insults as Liam has a stunning realization. B&B viewers will recall that Bill urged Liam to put his marriage back together. Liam will determine that Bill’s guidance was more of a threat. Bill was really telling Liam to make amends with Steffy or risk losing her to him. 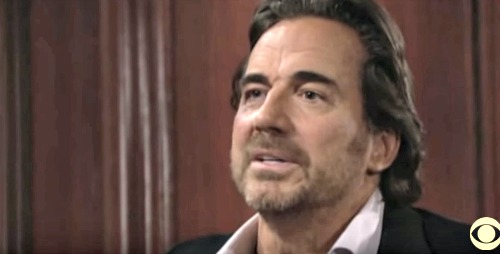 The Bold and the Beautiful spoilers point to Friday as Bill’s shooter reveal, but it’s possible he’ll blurt out a name for Thursday’s cliffhanger. Regardless of when it happens, Bill will accuse Ridge (Thorsten Kaye) of pumping a bullet in him. Bill is mistaken, but you can bet Ridge will land in hot water anyway.

In the meantime, Steffy will deliver a surprising order to Hope (Annika Noelle). She’ll rant about the proposal secret spillage and argue that Hope needs to be honest. Steffy will insist that Hope should just admit that she wants Liam back. She’ll think this was a blatant act of sabotage.

Hope will disagree, so it sounds like plenty of arguments are coming up on Thursday’s episode. We’ll give you updates as other B&B details emerge. Stay tuned to the CBS soap and don’t forget to check CDL often for the latest Bold and the Beautiful spoilers, updates and news.