BY hellodrdavis on October 10, 2018 | Comments: 2 comments
Related : Soap Opera, Spoiler, Television, The Bold and the Beautiful 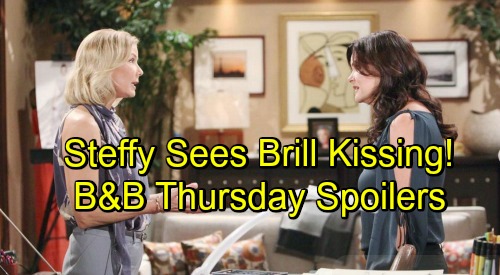 The Bold and the Beautiful spoilers for Thursday, October 11, tease that Steffy (Jacqueline MacInnes Wood) will be in shock after spying Bill (Don Diamont) and Brooke (Katherine Kelly Lang) kissing in Ridge’s (Thorsten Kaye) office at Forrester. But she’ll restrain herself from bursting in the room and calling them out. Instead, she’ll wait and plan to fill Ridge in later.

Of course, what Steffy didn’t see was that Bill initiated the kiss rather aggressively. Whether or not Brooke will actively reciprocate the kiss remains to be seen, but if she does, then Steffy will certainly take it all in. But whether or not Brooke ultimately pushes Bill away, the damage has been done, and it’s only a matter of time before Ridge finds out and hits the roof.

Next, on the new B&B episode on Thursday, October 11, Brooke will decide that Katie (Heather Tom) should be filled in about what Ridge did to rig the custody case in her favor. She’ll visit with Katie and reveal how Ridge took revenge on Bill by pressuring Judge McMullen (Joe Lando) to rule against Bill.

Katie will be stunned by the news, and she’ll feel horrible about the injustice that’s been done, but she’ll also realize that some terrible things could happen if the truth about what Ridge did were to get out. First off, both Ridge and the judge could face legal action and even go to jail. Second, Bill has really stepped up lately with Will (Finnegan George), and Katie won’t want to jeopardize that.

Katie and Brooke will consider all of this, and ultimately the two will decide to hold onto the information for now and not expose the collusion between Ridge and the judge. But Katie will feel intense guilt over keeping the secret going forward, which will lead her to take some measures toward Bill. According to B&B spoilers, Katie will later make a gracious overture toward Bill. Will she agree to go back to a joint custody arrangement?