BY Heather Hughes on September 19, 2018 | Comments: one comment
Related : Soap Opera, Spoiler, Television, The Bold and the Beautiful 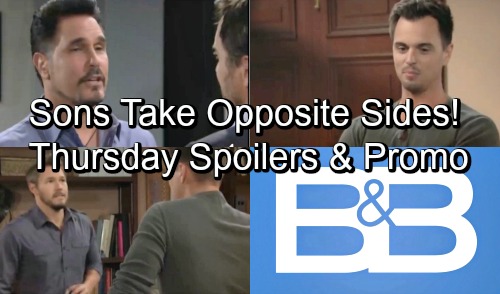 The Bold and the Beautiful (B&B) spoilers for Thursday, September 20, tease that Liam (Scott Clifton) and Wyatt (Darin Brooks) will end up on opposing sides. B&B fans know a major war is underway. Katie’s (Heather Tom) seeking sole custody of Will (Finnegan George), but Bill (Don Diamont) isn’t going down without a fight. He’s vowed to do whatever it takes to keep his son.

During Wyatt and Liam’s next chat, they’ll mull over this tricky situation. Liam will back Katie up and remind Wyatt of all the times Bill’s let them down. Now that Liam’s a father, he’ll get why Katie’s trying to protect her child. Liam will support Katie’s right to keep Bill away and let Thorne (Ingo Rademacher) serve as a role model.

Wyatt, on the other hand, won’t be sure this is in Will’s best interest. Although Wyatt and Bill have a complicated relationship, there’s still some love between them. Wyatt knows that deep down, Bill cares about his boys. He makes terrible decisions sometimes and causes plenty of pain, but some bonds can’t be completely broken.

Furthermore, Wyatt may argue that Bill could have a do-over with Will. Bill has a shot at correcting the errors he’s made and proving he can be a good dad. Wyatt might want to see Bill grow and change, but Liam probably won’t think that’s possible.

Regardless, these brothers will make some admissions on Thursday. Liam will confess that he’s been subpoenaed to testify for Katie, which will prompt a confession from Wyatt. He’ll indicate that he’s going to testify for Bill, so they’ll just have to tell the truth and see how things turn out.

In the meantime, Bill will try to put Ridge (Thorsten Kaye) in his place. He’ll contend that he doesn’t have to listen to Ridge or anyone else. Bill will refuse to bow down to Thorne and Katie’s demands. After this confrontation wraps up, The Bold and the Beautiful spoilers say Bill and Ridge will take action. They’ll start separate missions to gain an advantage, but both tactics will be dirty!