The Bold and the Beautiful Spoilers: Thursday, September 6 Update – Bill Asks Katie For A Big Favor – Hope Worries About Steffy 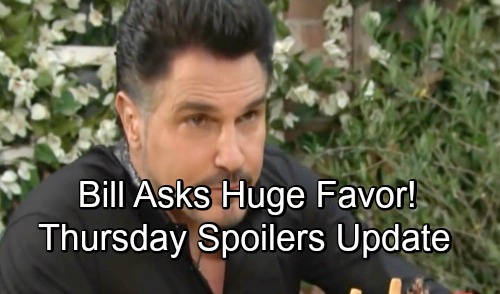 The Bold and the Beautiful spoilers for Thursday, September 6, tease that Hope (Annika Noelle) will worry about Ridge’s (Thorsten Kaye) big announcement at Forrester – that he will have to choose between funding Hope’s Hope For The Future (HFTF) line or Steffy’s (Jacqueline MacInnes Wood) Intimates line. She’ll discuss her dilemma with Liam (Scott Clifton) and fear that Ridge may pick Steffy’s line out of favoritism.

Hope will tell Liam just how much HFTF means to her, especially the socially conscious aspect of the line. “I feel like I can never give back as much as I’ve been given,” she’ll say, and Liam will reassure her that Ridge’s decision will be a fair one. “Steffy has been nothing but supportive,” he’ll say. “She’s not going to go sabotage you behind your back.”

Meanwhile, on the new B&B episode on Thursday, September 6, Steffy will have a chat with Ridge and make it clear to him why he should choose her Intimates line over the HFTF line. Will Steffy just be making the case for her line, or will it be sabotage, as Hope fears?

Finally, on Thursday, September 6, Bill (Don Diamont) and Brooke (Katherine Kelly Lang) will discuss Bill’s issues concerning Will (Finnegan George) and Katie (Heather Tom). Bill will lament about how he’s made mistakes but wants to make up for them and be there for his young son. “I’ve found a better life,” he’ll say, “or maybe it found me.”

It looks like Brooke will be moved by Bill’s words. B&B spoilers say that she’ll surprise Bill by stating that she supports him in the custody dispute, and that he’ll ask Brooke for a considerable favor…to speak on his behalf at the custody hearing.