The Bold and the Beautiful Spoilers: Tuesday, April 3 – Bill Covers for Liam – Katie Points the Finger at Quinn

BY Heather Hughes on April 2, 2018 | Comments: one comment
Related : Soap Opera, Spoiler, Television, The Bold and the Beautiful 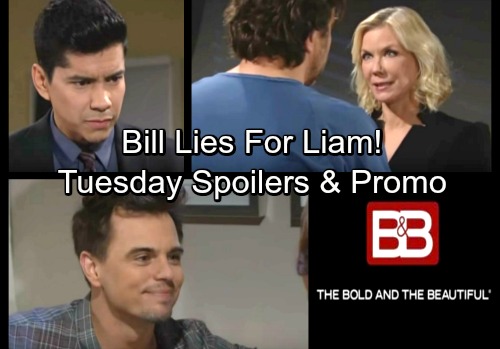 The Bold and the Beautiful (B&B) spoilers for Tuesday, April 3, tease that Bill (Don Diamont) will have to decide whether to sell Liam (Scott Clifton) out or cover for him. Once Liam finally convinced his dad that his claims were true, Bill was furious. However, it looks like Hope’s (Annika Noelle) speech may have gotten through to him. Deep down, Bill knows he’s really the one to blame for this mess.

Detective Sanchez (Jeremy Ray Valdez) will once again ask about the shooter. He’ll wonder if Bill remembers who shot him. Sanchez will give Bill an easy out with the wording of that question. Since Bill’s back was turned, he didn’t witness anything. Bill won’t be lying when he admits he doesn’t remember seeing the shooter’s face that night.

However, Liam will need to be careful! He’s on Bill’s bad side again and that’s not the ideal place to be. At least Liam will avoid jail for now and Ridge (Thorsten Kaye) will be off the hook soon enough. The Bold and the Beautiful spoilers say Brooke (Katherine Kelly Lang) will have good news for Ridge on Tuesday. She’ll explain that Detective Sanchez is going to question Bill again.

Brooke will think Sanchez can pry the truth out of Bill this time. She’ll feel confident that Ridge will be released before long. Elsewhere, Wyatt (Darin Brooks) and Katie (Heather Tom) will enjoy some juicy pillow talk. After a session in bed, Bill’s shooting will come up in their conversation. Wyatt will ask if Katie thinks Bill’s story is true. He’ll wonder if she thinks Ridge actually fired that shot.

B&B spoilers say Katie will offer an alternative suspect. She’ll hint that maybe Wyatt should consider his mother’s guilt. Wyatt will dismiss the idea that Quinn (Rena Sofer) tried to kill Bill. He’ll think if Quinn wanted to shoot his father, she would’ve done it by now.