BY hellodrdavis on August 20, 2018 | Comments: 2 comments
Related : Soap Opera, Spoiler, Television, The Bold and the Beautiful 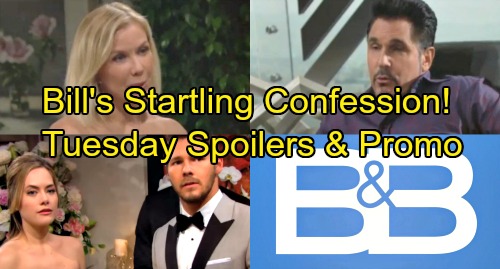 The Bold and the Beautiful (B&B) spoilers for Tuesday, August 21, tease that Liam (Scott Clifton) and Hope’s (Annika Noelle) wedding will finally come to fruition. It’s been months in the making, but they’ll finally be joined together as husband and wife! Look for some heartfelt vows from the bride and groom as they celebrate their love and their big day.

Of course, it won’t be a happy day for everyone involved. Ridge (Thorsten Kaye) will likely continue to mope around and worry about how Steffy (Jaqueline MacInnes Wood) is going to feel watching Liam marry Hope. But Steffy’s determined to handle the day with poise and grace, in order to demonstrate her support of Lope’s union and show that they’re all coming together as an extended family.

Brooke (Katherine Kelly Lang) will even say a few words about the family coming together, but her words will probably enrage Taylor (Hunter Tylo), who is attending the wedding under duress, to provide moral support for Steffy. B&B spoilers say that Taylor will reflect as the day progresses, as she starts to remember all the times Brooke caused problems in her own marriage. Uh oh.

Meanwhile, on the new B&B episode on Tuesday, August 21, Bill (Don Diamont) will spend some quality time in his office with Justin (Aaron D. Spears). Bill will brood over all the reasons why he was not invited to the wedding, including his lies and previous manipulation of Liam, Hope, Steffy, and Wyatt (Darin Brooks). Bill’s got a lot to be sorry for, and he surely won’t be surprised that Liam didn’t want him to be present on his wedding day.

But Bill will express some hope for the future. He’ll tell Justin that he may not be with his sons today, but that doesn’t mean that he won’t ever be a part of their lives. Perhaps Bill is planning on making some positive changes going forward so he can be the kind of father that his sons would be proud of.

Or perhaps Bill is just planning some more lies and manipulation to worm his way into his sons’ lives. B&B spoilers say that Bill will make a startling confession to Justin, and that this confession will lead Bill down a dangerous path. What will Bill confess? It may have something to do with Will (Finnegan George), and the difficulties Bill’s having being a parent to his youngest son.

It sounds like we’re in for some lovely wedding scenes and good B&B drama! Stay tuned to the CBS soap and don’t forget to check CDL often for the latest Bold and the Beautiful spoilers, updates, and news.