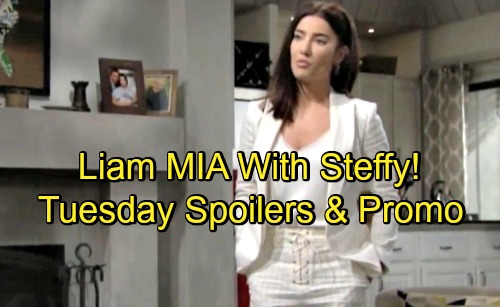 The Bold and the Beautiful (B&B) spoilers for Tuesday, August 28, tease that Thorne (Ingo Rademacher) and Bill’s (Don Diamont) feud will continue. B&B fans know that Bill blames Thorne for the latest custody drama. He believes Thorne’s the only reason Katie (Heather Tom) wants to take Will (Finnegan George) away from him.

As a result, Bill will try to put Thorne in his place on Tuesday’s new B&B episode, August 28. He’ll shout that Thorne doesn’t get an opinion on his son and he never will. Of course, Thorne will think he has every right to protect the people he cares about. He’s dating Katie, so he intends to do what’s best for her boy. Thorne will keep pushing Katie to seek sole custody, so Will’s going to remain at the center of the conflict.

The Bold and the Beautiful spoilers say Bill will be willing to play dirty if need be, but so will Thorne. Since Will’s been burned by Bill lately, he won’t want to hang out with his dad. Naturally, Thorne will think that proves Bill shouldn’t be around his kid. He’ll plan on using Will’s disdain for Bill as ammo in the custody case.

Meanwhile, Liam (Scott Clifton) will feel a bit out of place in Steffy’s (Jacqueline MacInnes Wood) home. Now that he’s moved out, things will be awkward during his latest visit. However, Steffy won’t want Liam to think he’s not welcome. She’ll argue that he can still spend as much time with Kelly as he wants. By the end of their chat, Liam should feel more comfortable with the idea of dropping by.

Unfortunately, Hope (Annika Noelle) could battle some jealousy soon. As her ultrasound appointment draws near, Hope will go off in search of new husband and “baby daddy.” She’ll find Liam with Steffy and Kelly, so there could be some tension in the room.

Hope supports Liam’s other family, but she doesn’t want him to neglect his family with her. She may suspect that his child with Steffy is always going to come first. Sadly, another incident will feed Hope’s suspicions later this week, August 27-31.