BY Heather Hughes on July 16, 2018 | Comments: one comment
Related : Soap Opera, Spoiler, Television, The Bold and the Beautiful 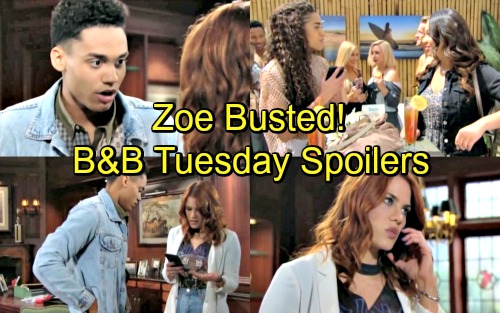 The Bold and the Beautiful (B&B) spoilers for Tuesday, July 17, tease that Xander (Adain Bradley) will confirm his hunch. After he realized Zoe (Kiara Barnes) was in Los Angeles, he suspected she was to blame for Sally’s (Courtney Hope) predicament. Now Xander’s hoping he can get to the bottom of this and clear Sally’s name.

After Xander explains the situation and provides a picture of his ex, Sally will be stunned. She’ll realize it’s the mural painter who’s been working for Wyatt (Darin Brooks). It won’t take long for Xander and Sally to put the puzzle pieces together. They’ll determine that Zoe stole Sally’s laptop while she was at the house. She made the posts behind Sally’s back and let her take the fall for the comments.

Naturally, The Bold and the Beautiful spoilers say Sally will be furious. She’ll want to take Zoe down in a big way! However, Xander will shift his attention to Emma (Nia Sioux) for the time being. B&B fans know Zoe has inserted herself in Emma’s life, so that part of the drama will really concern Xander.

Xander will think he needs to get in touch with Emma and warn her immediately. He knows Zoe’s nuts, so there’s no predicting what she might do next! Meanwhile, an oblivious Emma will get a shocking phone call. Zoe will suggest that Emma’s boyfriend is calling, but it looks like Sally will still have Xander’s phone.

Sally will insist that they think Zoe’s behind the latest threats. She might urge Emma to keep Zoe busy until they can get to the café. Then again, Emma could always lure Zoe back to Forrester Creations. Either way, Sally will be ready for a fierce confrontation. She’ll be absolutely livid with Zoe for causing such a mess.

Sally could’ve been fired if Xander hadn’t helped her clear things up. She’s faced enough sabotage for a lifetime, so it’s easy to see why she’s so upset. When Sally finally sees Zoe again, she’ll lunge forward in attack mode. The Bold and the Beautiful spoilers say Wyatt will have to hold the raging redhead back!

It sounds like another exciting episode’s coming up. We’ll give you updates as other B&B news emerges. Stay tuned to the CBS soap and don’t forget to check CDL often for the latest Bold and the Beautiful spoilers, updates, and news.