The Bold and the Beautiful Spoilers: Tuesday, July 24 – Steffy Blows Up Over Liam’s Betrayal – Bill Awaits a Bright Future

BY Heather Hughes on July 23, 2018 | Comments: one comment
Related : Soap Opera, Spoiler, Television, The Bold and the Beautiful 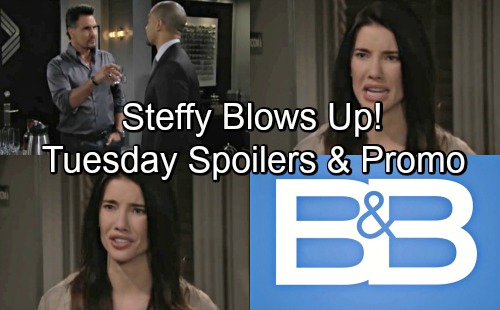 The Bold and the Beautiful (B&B) spoilers for Tuesday, July 24, tease that Bill (Don Diamont) will defend his pursuit of Steffy (Jacqueline MacInnes Wood). He’ll insist that Liam (Scott Clifton) is just going to keep jerking her around. Bill won’t think Steffy deserves to be treated that way. He’ll assure Justin (Aaron D. Spears) that he can give Steffy and Kelly the best future possible.

Bill will add that Steffy needs to stop being a pawn in Liam’s game. As long as Hope’s (Annika Noelle) around, Liam’s going to be drawn to her. Bill will feel confident that Steffy’s going to wise up and see that soon enough. He’ll just want Steffy to surrender and build a life with him instead.

Meanwhile, Steffy will rip into Liam. She just found him kissing half-naked Hope in a changing room, so it’s easy to see why she’s upset! B&B spoilers say Steffy will demand answers. She’ll wonder how Liam could do this when she’s been home taking care of their child. Steffy will remind Liam of their family and try to understand why he’d be locking lips with Hope.

Liam may stammer out excuses and apologies, but Steffy won’t buy any of them. She’ll feel like it’s too late to say sorry. The Bold and the Beautiful spoilers state that Steffy will eventually stomp off. She’ll realize she needs to get away from Liam and make a decision about what’s next.

After seeing Liam and Hope’s close moment, things will become much clearer for Steffy. She’ll begin to view Bill as her only real option. This isn’t the outcome Steffy wanted, but she’ll still see the benefits of picking Bill. He’s willing to give Steffy his whole heart and that’s not something Liam can do right now.

Back with Hope and Liam, they’ll face intense guilt. The Bold and the Beautiful spoilers say they’ll wish they could take back their actions, but what’s done is done. Liam and Hope will have to live with the pain they caused. We’ll give you updates as other B&B news comes in. Stay tuned to the CBS soap and don’t forget to check CDL often for the latest Bold and the Beautiful spoilers, updates, and news.