BY Heather Hughes on June 25, 2018 | Comments: one comment
Related : Soap Opera, Spoiler, Television, The Bold and the Beautiful 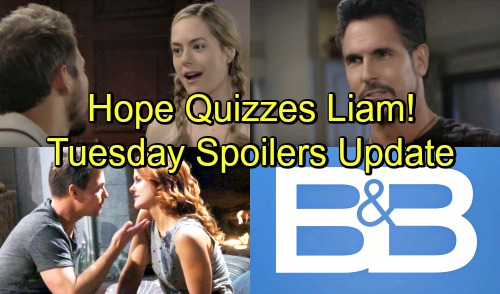 The Bold and the Beautiful (B&B) spoilers for Tuesday, June 26, tease that Hope (Annika Noelle) will try to wrap her head around Liam’s (Scott Clifton) admission. She’ll struggle to understand why Steffy (Jacqueline MacInnes Wood) would delay the wedding. Hope will point out that Steffy desperately wanted to be Liam’s wife, so the fact that she’s backing off now is odd.

Liam will assure Hope that it’s just a short postponement. He’ll suggest that Steffy wants to let the chaos die down before they make it official. Hope will still think this sounds fishy, but she’ll probably let it go for now. She’ll focus on handling her own heartbreak, which should become increasingly difficult. Now that she’s working with Liam again, Hope have to face what she’s lost all the time.

Meanwhile, Bill (Don Diamont) and Steffy’s showdown will continue. B&B fans know that Steffy’s fed up with Bill’s manipulation. She vowed to end it once and for all, but Bill clearly won’t be shaking in his boots. As usual, Bill will feel completely in control of the situation. He’ll reiterate what’s at stake and urge Steffy to be smart about this. One wrong move could send Taylor (Hunter Tylo) to prison!

The Bold and the Beautiful spoilers say Bill will try to get through to Steffy. He’ll think she’s simply ignoring their deep connection. Bill will want Steffy to admit that she felt a sense of peace and fulfillment with him. He’ll believe Liam has never given her that and never will, but Steffy will disagree.

Once Bill makes his spiel, Steffy will maintain that Liam’s the only man for her. She’ll shut down Bill’s claims of love and argue that this is nothing but cruel. It looks like Bill will just have to keep tightening his grip, which certainly isn’t good news for “Steam.”

Across town, Sally (Courtney Hope) and Wyatt (Darin Brooks) will become even more smitten with each other. The Bold and the Beautiful spoilers say they’ll have passionate sex and talk about what’s next. They don’t know exactly where this romance is going, but they’re more than willing to enjoy the ride.

B&B has some hot scenes on the way, so stay tuned. We’ll give you updates as other details emerge. Stick with the CBS soap and don’t forget to check CDL often for the latest Bold and the Beautiful spoilers, updates, and news.