The Bold and the Beautiful Spoilers: Tuesday, October 23 Update – Bill Clings To Life – Tensions Rise Between Pam and Quinn 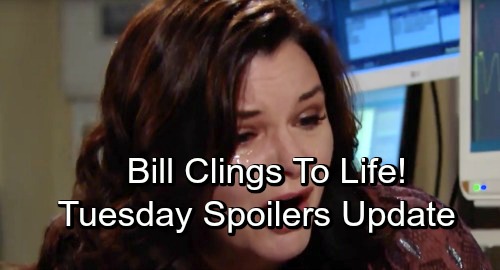 The Bold and the Beautiful spoilers update for Tuesday, October 23, tease that Thorne (Ingo Rademacher) and Ridge (Thorsten Kaye) will quickly assess what’s just happened at Bill’s (Don Diamont) estate. The three men were brawling in the living room, and then Bill and Ridge moved to the balcony, where a scuffle occurred off-camera and Bill went over the railing.

Things won’t look good for Bill, who will end up in grave condition as a result of the fall. But what will Ridge and Thorne tell the authorities about what happened? Sooner or later, the police will show up to get to the bottom of how Bill ended up over the balcony. Will Ridge and Thorne decide to get their stories straight?

The two men will also need to gear up for everyone else’s reaction when they find out about what happened. Katie (Heather Tom) and Brooke (Katherine Kelly Lang) are going to be horrified to learn that Thorne and Ridge went to Bill’s estate to get in his face. And they will eventually have to face Liam (Scott Clifton) and Wyatt (Darin Brooks), who will naturally have questions about exactly how Bill fell.

Meanwhile, on the new B&B episode on Tuesday, October 23, Pam (Alley Mills) and Quinn (Rena Sofer) will be at each other’s throats. Ever since Pam announced that she wanted to have her wedding at the Forrester estate, Quinn has been on edge. And to make matters worse, Pam wants Stephanie’s (Susan Flannery) picture reinstated for the ceremony.

Look for Pam and Quinn to clash over the wedding arrangements, and for Quinn to run interference on nearly every wish that Pam has. B&B spoilers say that things will get heated between the ladies, and Quinn will even make a dig at Pam’s unstable past. In response, Pam will threaten Quinn not to ruin her wedding. The claws come out!