The Bold and the Beautiful Spoilers: Tuesday, September 25 – Thorne and Katie Tie The Knot – Justin Worries About Bill

BY hellodrdavis on September 25, 2018 | Comments: one comment
Related : Soap Opera, Spoiler, Television, The Bold and the Beautiful 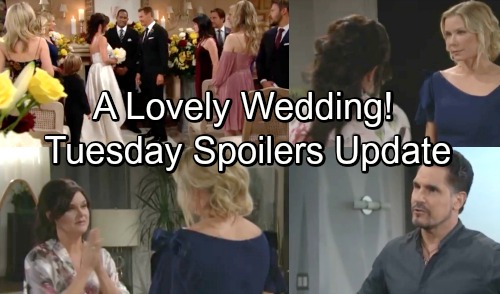 The Bold and the Beautiful spoilers update for Tuesday, September 25, tease that Katie (Heather Tom) and Thorne’s (Ingo Rademacher) wedding day will bring great joy for some and stress for others. Before the ceremony, Thorne and best man Ridge (Thorsten Kaye) will beam happily and talk about how nothing is more important than family and taking care of one’s family.

Of course, “taking care of family” is just what Ridge believes he’s doing by pressuring Judge McMullen (Joe Lando) to rule in favor of Katie in her upcoming custody case against Bill (Don Diamont). Ridge thinks that Katie has a strong case now that she’s marrying Thorne, but a little extra reassurance in the form of judge tampering can’t hurt, or so Ridge thinks.

Next, on the new B&B episode on Tuesday, September 25, Bill will fume in his office alongside Justin (Aaron D. Spears). Bill won’t like it that Katie and Thorne are getting married as a tactic for the custody hearing. He’ll rant that the whole situation has gone far enough and that Will’s (Finnegan George) life is being turned upside down, while Justin worries that Bill come unhinged.

Bill will mope and carry on, but there will be nothing he can do about the situation…or is there something he can do? B&B spoilers say that Bill will ultimately call a surprise witness at the hearing, so maybe he’ll offer a clue as to who it might be.

Meanwhile, Katie and Brooke (Katherine Kelly Lang) will have yet another chat about the custody dispute as Katie’s getting dressed for the wedding. Brooke would like nothing more than for Katie to drop her petition and work things out with Bill privately, rather than seek full custody from a judge. But Katie will stress to Brooke once again that her objective is not to keep Bill away from his son.

Finally, on Tuesday, September 25, Katie and Thorne will tie the knot in a lovely ceremony, with both Bridget (Ashley Jones) and Donna (Jennifer Gareis) in attendance.

It sounds like we’re in for some great scenes on Tuesday, so stay tuned! We’ll give you updates as B&B news comes in. Stick with the CBS soap and don’t forget to check CDL often for the latest Bold and the Beautiful spoilers, updates, and news.