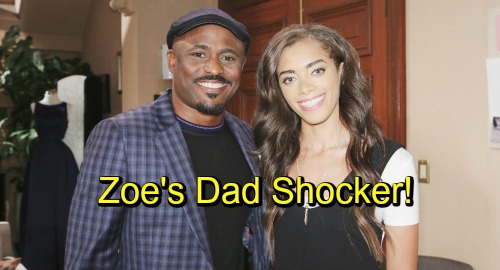 The Bold and the Beautiful spoilers tease that Zoe (Kiara Barnes) will be in for a shocker when her dad suddenly pops into town. Her dad will be portrayed by none other than TV personality Wayne Brady. Wayne is currently the host of the CBS game show “Let’s Make A Deal” and he’ll be starting his run as Zoe’s dad, Dr. Reese Buckingham, on Friday, November 30.

As it turns out, Zoe and her dad don’t have the best relationship, so his appearance won’t be a pleasant surprise for Zoe. “He is a doctor who comes in and charms everyone,” Wayne tells SOD, “but the only person he can’t seem to charm is his own daughter, and the rest will unfold from there…he wants nothing more than to have a relationship with his little girl.”

Despite their strained relationship, Zoe will likely be interested in showing her dad where she works and proving that she’s made something of herself. However, B&B spoilers say that Dr. Buckingham will be in for a real shock when he learns that his daughter is modeling skimpy lingerie.

Dr. Buckingham surely had high hopes and dreams for his daughter, but modeling underwear probably wasn’t one of them. Look for conflict between Zoe and her dad on the issue of her job. “Even though she has been on her own and making her way in the world,” Wayne tells SOD, “it’s not his first choice for what he’d want his daughter to be doing.”

It looks like Dr. Buckingham will be staying in Los Angeles for a while, so he and Zoe will have to work through their issues. Perhaps we’ll learn a bit more about what caused their relationship to grow strained in the first place. It sounds like there’s an interesting history there.

Are you looking forward to seeing Wayne Brady on B&B? Stay tuned to the CBS soap and don’t forget to check CDL often for the latest Bold and the Beautiful spoilers, updates, and news.