BY hellodrdavis on December 28, 2018 | Comments: one comment
Related : Soap Opera, Spoiler, Television, The Bold and the Beautiful 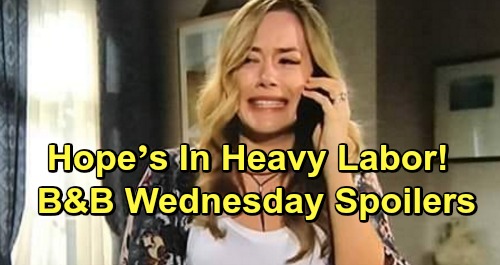 The Bold and the Beautiful spoilers for Wednesday, January 2, tease that Hope Spencer (Annika Noelle) will continue to experience heavy labor pains in her hotel room on Catalina Island.

She’s just experienced some major contractions and her water broke, and she’s stuck on the island alone. Of course, she’s only 8 months pregnant, so her labor is coming a bit early, which is very scary situation all around.

Liam Spencer (Scott Clifton) will be beside himself with worry as he’s stranded in Los Angeles due to heavy winds. He’ll be able to chat with Hope via phone, but what he really wants is to be there to support her through her labor.

Liam’s fellow passengers Matt Cannistra (Jim O’Heir) and Kieran Cannistra (Monica Horan) will try to help him, but there won’t be much they can do.

The winds will ground all flights to Catalina Island, and Liam will have no way to get to Hope. But in the midst of his panic, Liam will have a bright idea. He’ll remember that Bill Spencer (Don Diamont) has access to the Spencer helicopter and he’ll hope that his dad may be able to pull off a miracle.

Liam will call his dad with a special request. He’ll want the Spencer helicopter to brave the heavy winds and take him to the island. Bill will likely be surprised by a call from his estranged son, but he’ll be more than willing to help out.

Bill recently made a vow to become a changed man and put his family first, and as a result he’ll move heaven and earth to help his son get to his pregnant wife.

Bill will find himself especially worried about his unborn grandchild, and he’ll do everything in his power to get someone to fly Liam to Catalina, but it might not be easy. The weather will be terrible and the winds may prevent an immediate flight.

It looks like even with the private helicopter, Liam will have to wait for the winds to die down a bit for takeoff.