BY Marcy Cohen on November 14, 2018 | Comments: one comment
Related : Soap Opera, Spoiler, Television, The Bold and the Beautiful 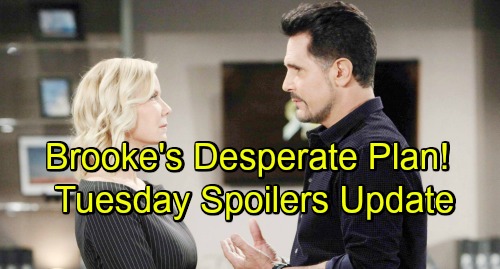 The Bold and the Beautiful (B&B) spoilers for Wednesday, November 14, tease that Bill (Don Diamont) will gleefully tighten his grip. He’s thrilled to finally be in control again, so he intends to take full advantage of this. Bill’s got a recording of Ridge (Thorsten Kaye) and Judge McMullen’s (Joe Lando) incriminating conversation. Now he has the power to send the guilty parties to the state pen.

Judge McMullen and Ridge will keep sweating it out on Wednesday, but they won’t be the only ones. Thorne (Ingo Rademacher) and Katie (Heather Tom) will worry about their family situation getting turned upside down. When Ridge first admitted that he influenced the judge, Thorne was appreciative. Thanks to Katie’s growing panic, Thorne should realize it wasn’t such a good idea after all!

Naturally, Katie will remain on in full-blown freak-out mode. She’ll feel like Bill’s going to rip her son away from her at any moment. Thankfully, that’s not going to happen. The Bold and the Beautiful spoilers say Bill will simply demand a fair custody agreement. He may suggest he intends to do what’s in Will’s best interest – unlike a certain scheming Forrester.

Of course, Bill may need a little encouragement to head in that direction. He’ll definitely need pressure to keep Ridge and the judge out of jail. That’s where Brooke (Katherine Kelly Lang) will come in. B&B spoilers reveal that Brooke will form a desperate plan. She’ll feel like she’s the only one who can prevent disaster and she’s probably right.

Brooke will gear up for a tearful appeal, so expect some emotional “Brill” scenes before the week’s over. Until then, Donna (Jennifer Gareis) and Pam’s (Alley Mills) alliance will grow stronger. They’ll talk about old memories in Wednesday’s episode, but they won’t let any bad blood hold them back.

Pam and Donna are currently on far better terms, so they’ll focus on the next phase of Quinn’s (Rena Sofer) takedown. The Bold and the Beautiful spoilers say Eric (John McCook) will sense trouble, but he’ll hope these fired up women can sort it out. Unfortunately, the hostility’s only going to get worse from here.

Forrester Creations is about to become a war zone, so don’t miss the turmoil ahead. We’ll give you updates as other B&B news comes in. Stay tuned to the CBS soap and don’t forget to check CDL often for the latest Bold and the Beautiful spoilers, updates, and news.