The Bold and the Beautiful Spoilers: Week of February 19 – Sally Threatens Bill – Hope’s Winning Liam – Wyatt Back With Katie 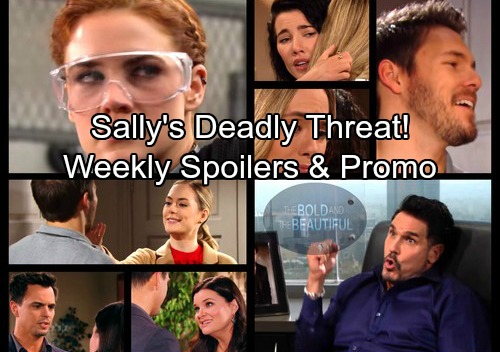 The Bold and the Beautiful (B&B) spoilers for the week of February 19-23 tease that we’ll see some big surprises. First, Liam (Scott Clifton) will respond to Steffy’s (Jacqueline MacInnes Wood) latest plea. She’ll continue to beg for forgiveness, but it seems Liam won’t be ready to take that step. Even if he could forgive Steffy, he can’t forget what she’s done.

Liam will remain excited about the upcoming birth of his daughter, but he’ll have an interesting perspective on her future. He definitely won’t be willing to rush back into a reunion. Steffy will feel like they need to be in a committed relationship, but Liam may not think that’s the ideal solution. He could argue that he doesn’t want to bring any tension into their little girl’s world.

Liam may believe peaceful co-parenting is the better option, but Steffy won’t lose hope. Liam really lit up at the ultrasound, so Steffy will think that’s something she can work with. She’ll believe this baby will bring their family together. When Steffy gives Hope (Annika Noelle) updates, she’ll thank her for being so supportive. Steffy will suggest she’s lucky to have Hope in her corner.

However, Ridge (Thorsten Kaye) will have his doubts about Hope’s ability to resist Liam. He knows from personal experience that it’s tough to give up on your true love. Ridge also knows there’s plenty of history for Liam and Hope to build on. He’ll worry that Hope might swoop in and get Liam back.

Other Bold and the Beautiful spoilers say Wyatt (Darin Brooks) and Katie (Heather Tom) will reach an understanding. They’re both pining for each other, so it’s time to get on the same page. Katie and Wyatt will finally ditch all this “no strings attached” business. They’ll reveal their deep feelings for each other and turn their casual romance into a more serious one.

In Bill’s (Don Diamont) office, he’ll get a visit from an angry Sally (Courtney Hope). She’ll insist that someone’s going to put an end to Bill’s reign of terror. B&B fans can expect Bill to be amused by Sally’s threat. He won’t think there’s any way she can hurt him, but he shouldn’t underestimate this determined Spectra!