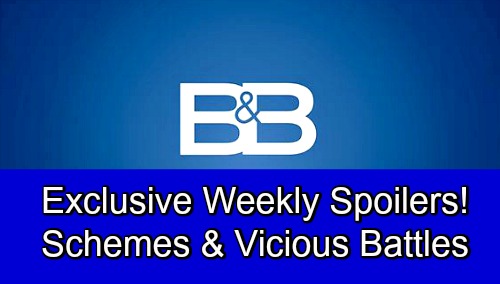 The Bold and the Beautiful (B&B) spoilers for the week of July 16-20 tease that we’ll see some VERY determined characters. For starters, there’s Zoe (Kiara Barnes). It’s pretty easy to see why Xander (Adain Bradley) broke things off and tried to stay away from her. She seems like B&B’s newest psycho.

Zoe will stir up more trouble this week as she works to win Xander back. However, she’ll also run into some major obstacles. The Bold and the Beautiful spoilers say an equally determined Sally (Courtney Hope) will look into the online threats. She’ll realize Zoe stole her laptop and made the comments without her knowledge.

The Bold and the Beautiful spoilers say Sally will blow her top and lunge toward her latest adversary. Fortunately, Wyatt (Darin Brooks) will be on hand to stop Sally’s attack. Meanwhile, Xander will finally get a clue. He’ll hear some details about Wyatt’s mural painter and Emma’s (Nia Sioux) new gal pal. It won’t take long for Xander to guess that crazy Zoe’s stalking him.

Later, the Hope for the Future line will have a long-awaited fashion show. B&B spoilers say Thorne (Ingo Rademacher) will feature some fabulous designs. Emma’s dance crew will also be there to twist and twirl away. Alas, the big finish won’t go as planned. Zoe will manage to steal the spotlight from Emma, so their friendship will certainly be short-lived.

Of course, Zoe didn’t really want to be Emma’s friend anyway. She wants Xander back, so expect a fierce rivalry to erupt soon. Over with Bill (Don Diamont), he’ll mull over Hope’s (Annika Noelle) pregnancy. This unexpected development will leave Bill feeling optimistic about his chances with Steffy (Jacqueline MacInnes Wood).

The Bold and the Beautiful spoilers say Bill will do some brainstorming and come up with his next scheme. He’ll rely on a torn Justin (Aaron D. Spears) to set something sneak in motion. Bill will do whatever he can to push Liam (Scott Clifton) toward Hope and drive “Steam” apart.

Naturally, Brooke (Katherine Kelly Lang) will do a little manipulating as well. She’ll corner Liam and try to make him see all the benefits of choosing Hope. Brooke will argue that her daughter’s the best match for him. She’ll urge Liam to understand and accept that Hope is his destiny.