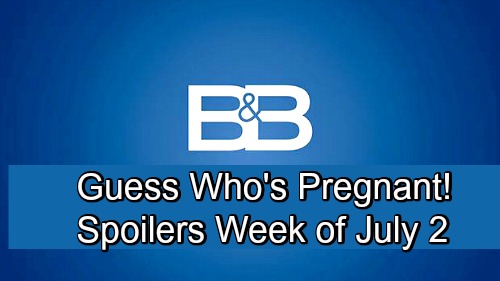 The Bold and the Beautiful (B&B) spoilers for the week of July 2-6 tease that several lives will be changed forever. Some startling developments will shake things up, so let’s dive right in. For starters, chaos will erupt at Forrester Creations. Hope (Annika Noelle) will become the target of a dangerous threat, so Thorne (Ingo Rademacher) and Liam (Scott Clifton) will do some investigating.

After a note surfaces with a warning, there should be concerns about deadly peril. Liam may be with Steffy now, but he still cares about Hope and wants to protect her. Thorne and Liam will bring Ridge (Thorsten Kaye) in the loop soon enough. They may bicker about the seriousness of the threat, but they’ll all agree they’d like to find out who’s behind it.

While the guys at Forrester mull that over, Bill (Don Diamont) will free Steffy (Jacqueline MacInnes Wood) from his tight grip. He’ll ditch his blackmail scheme and let Steffy move on with her fiancé. Bill will hate that Steffy still wants Liam, but he’ll determine that his tactic just isn’t going to pay off. He may keep hope alive, but he can’t lock Steffy down like this.

Other Bold and the Beautiful spoilers say Hope will get quite a shock. She’ll discover she’s pregnant and give Liam the news soon after. B&B viewers can expect some emotional “Lope” moments. Liam will assure Hope that they’re going to figure this out, but he’ll realize he’s got a real dilemma on his hands.

Over with Steffy, she’ll give Quinn (Rena Sofer) and Eric (John McCook) updates on her impending wedding. Steffy will contend that she’s ready to make Liam her husband again. Once Liam comes home, Steffy will share how excited she is to become a united family. She’ll let Liam know she doesn’t want to wait after all. That’s when Liam will drop Hope’s baby bomb, so we’ll see some fireworks.

Speaking of fireworks, Sally (Courtney Hope) will do some Independence Day decorating this week. She’ll also talk to Wyatt about her Forrester future, but you can bet there’ll be some hurdles along the way. Finally, Brooke (Katherine Kelly Lang) will hear about Hope’s pregnancy predicament. She’ll push her daughter to fight for Liam, so Hope could end up using this baby to her advantage.