The Bold and the Beautiful Spoilers: Week of November 12 Preview Video – Bill Threatens Ridge with Prison – Katie Fears Losing Will 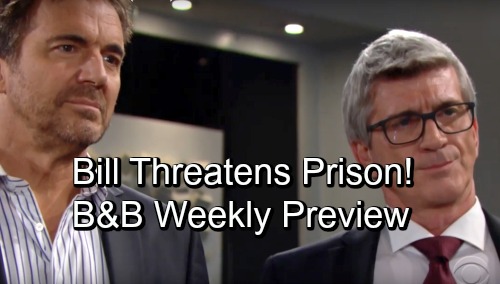 The Bold and the Beautiful (B&B) spoilers for the week of November 12-16 tease that a con job will lead to big trouble on the CBS soap. B&B fans know Bill (Don Diamont) is riled up and ready to expose Ridge’s (Thorsten Kaye) dirty scheme. To do that, Bill will need a dirty scheme of his own.

Ridge will meet the judge in a parking lot, but they’ll both be confused about why they’re there. Once they realize they’ve fallen for Bill’s trap, they’ll fear exposure. Judge McMullen will start ranting about how they committed conspiracy. He’ll worry that Bill’s messing with them and will soon bring down the hammer.

Judge McMullen will actually be making things worse! Justin (Aaron D. Spears) will be with Bill in a nearby car, so expect another layer of sneakiness. They’ll have equipment set up so they can eavesdrop and record some proof. Ridge will spot Bill’s vehicle eventually, but it’ll be too late. He’ll run after the moving car, but Bill and Justin will be on their way back to Spencer Publications with evidence.

Soon after, Bill will have the upper hand. Justin will argue that Bill has everything he needs to “nail Forrester,” so they’ll put the next phase of the plan in motion. That mostly means threatening and gloating! Judge McMullen and Ridge will be asked to stop by Bill’s office at some point. He’ll note that he could send them both to prison, so they’ll be at his mercy.

Other Bold and the Beautiful spoilers say Katie (Heather Tom) will have a meltdown. She’ll shout that she could lose her son if the truth gets out. Katie never wanted this mess, but the damage is done. Thanks to Ridge, Katie will have to fret about having Will (Finnegan George) taken away from her.

The good news is Bill will ultimately soften. The bad news is it could mean the end of Ridge and Brooke’s marriage. It looks like Bill will give up his revenge plot after Brooke’s tearful appeal. She’ll be moved and grateful, so who knows what the future holds? Ridge will wonder if his freedom just might cost him his relationship!