The Bold and the Beautiful Spoilers: Will Steffy Inadvertently Cause Hope’s Miscarriage – Liam Blames Steffy, Chooses Hope the Victim?

BY Marcy Cohen on July 9, 2018 | Comments: one comment
Related : Soap Opera, Spoiler, Television, The Bold and the Beautiful 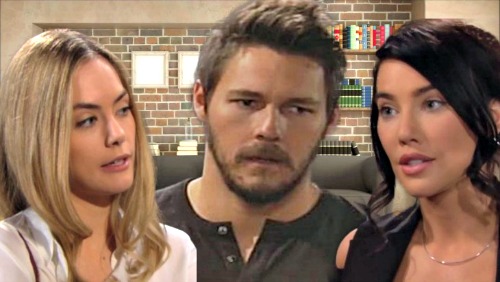 The Bold and the Beautiful (B&B) spoilers tease that Hope (Annika Noelle) may have more heartbreak in her future. Of course, Steffy (Jacqueline MacInnes Wood) could face plenty of it as well. Thanks to the mutual “baby daddy,” the drama’s really going to heat up on the CBS soap.

Steffy is appalled by Hope’s pregnancy news, so you can expect some heated confrontations. She’ll naturally argue that Hope did this on purpose or at least intends to manipulate Liam now. Hope didn’t mean to get herself knocked up, but she’s certainly not distraught about her bun in the oven. Despite some initial panic, Hope is now ready to welcome Liam’s child into her life.

Of course, this will reignite Hope and Steffy’s fierce feud. The Bold and the Beautiful spoilers say Liam will be caught in the middle of it all. He’ll wish he could somehow make both women happy, but that’s just not possible. Steffy and Hope will be optimistic about a future with Liam, but someone has to be the loser here.

Liam will just have to accept that he’ll be splitting his time between families. One of those families will have him in the home as a full-time dad. The other will have to get by with a part-time papa. Liam’s not known for being decisive, so it could be a while before he makes a firm choice. Steffy and Hope could face a stressful war in the meantime.

It’s worth mentioning that Steffy’s been known to cause her fair share of accidents. She inadvertently led to injuries for Ivy (Ashleigh Brewer) several times. We can’t forget about the altercation that resulted in Aly’s (Ashlyn Pearce) death either!

Will Hope become Steffy’s next victim? It’s easy to imagine a scenario where Hope falls during a fight. If Hope loses the baby because of Steffy’s actions, that could definitely affect Liam’s decision. He may turn against Steffy because of this shocking incident.

You can bet Ridge (Thorsten Kaye) and Brooke (Katherine Kelly Lang) would be part of the fallout. Like Hope and Liam, Brooke would probably blame Steffy for her daughter’s suffering. Ridge would stand with Steffy, so “Bridge” could be headed for more trouble. Can their relationship survive the chaos ahead? B&B fans will be anxious to see how it all pans out.

Bottom line, there’s a good possibility Hope won’t actually have this kid. Will Steffy be responsible for that and will it push Liam toward Hope? The Bold and the Beautiful spoilers say some shockers are brewing, so stay tuned. We’ll give you updates as other B&B details emerge. Stick with the CBS soap and don’t forget to check CDL often for the latest Bold and the Beautiful spoilers, updates, and news.