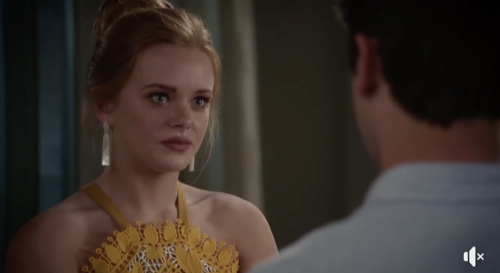 Tonight on Freeform their hit drama The Fosters returns with an all-new Tuesday, June 6, 2018, season 5 episode 22 series finale called, “Where the Heart Is – Conclusion,” and we have final The Fosters recap below. On tonight’s series finale episode as per the Freeform synopsis, “Conclusion. In the series finale, the moms make a huge decision that will change everyone’s lives.”

Brandon is lying on his bed. There is a knock at the door. It is Emma looking for Jesus. Meanwhile, Mariana and Callie find themselves in Jamie’s room. Marianna gets a text that Emma has shown up. Callie runs to Brandon’s room to keep Emma busy while Mariana goes to find Jesus. He is in bed with Jayden. Mariana pulls him away. She tells him not to volunteer any information.

Emma and Jesus talk alone. She tells him she loves him and she wants to be with him forever. Alone, Callie and Brandon talk. He doesn’t know what to say to Eliza. Callie reminds him he is getting married in a couple of hours. She thinks he loves her so he just needs to talk to her. They hug. Eliza sees them through the door. She wants to know if he still loves Callie. She wants to know if they are still getting married. He hesitates to answer. She runs off.

Stef and Lena sit on the beach. They cannot believe that Brandon is getting married tomorrow. They talk about whether they should sell the house. They drop their robes in the dark and jump into the ocean to skinny dip. An employee at the resort comes by and picks the robes up. He doesn’t seem them in the water. Later, they run around in search of towels.

Callie gets into bed next to Mariana. Mariana explains to her that she was trying to avoid seeing Max and ended up in Jamie’s room. It was all innocent. Callie asks her if she said anything about her and Brandon. Mariana is insulted and goes to sleep on the couch.

Mike comes to see Brandon who is thinking on the beach. Mike just got in. Brandon tells him he hasn’t slept. He is freaking out. He is afraid that he will feel pressure to get a real job and not be able to do what he wants to do.

Brandon brings the paperwork signed to Eliza’s parents. She trails behind him. He hands it to them and tells them he will earn and buy a house for them when he can. He is also going to be a film composer. Eliza chimes in that she supports him. They tell each other they love one another. Her parents smile. Eliza rips up the paperwork and declares that Stef and Lena are going to marry them on the

The next day, Callie and Mariana walk down the beach. Brandon stands waiting for his bride. He flashes back to all of his memories with Callie. She is also thinking about their life together. They smile at one another. Eliza makes her way down the aisle with her father.

Stef and Lena take turns speaking as they marry the two. While Lena speaks about what love is and all of its obstacles, Stef thinks about all of their good times and their bad. Jesus exchanges a look with Jayden. Emma catches it and looks suspicious.

At the wedding reception on the beach, Callie apologizes to Mariana for accusing her of telling Eliza about her history with Brandon. Mariana makes a quick decision to go talk to Matt. She finds him on the stairwell kissing a girl.

Jude and Eliza’s little brother talk. He cannot talk to his family like Jude can.

Callie asks Jude where he was the night before. He confesses to hooking up with a guy he met through an app. Callie asks him why he keeps doing it. He walks away unwilling to talk about it.

Jayden is angry with Jesus. She didn’t know he had a girlfriend. She tells him the sex wasn’t great, she lied. Emma overhears. He tells her the truth. She tells them she understands. They have been together for so long. Maybe they need the space to grow.

Stef and Lena sit and talk to Eliza’s parents. Jim wants to know what Lena’s agenda is if she runs for State Assembly. Both of them would love to find her some support.

The gang arrives home after their trip. Jesus is bummed out. He and Mariana talk. She thinks maybe they should go to Europe together. Jesus thinks it is a good idea. Jude finds Corey in his room. Stef and Lena talk to him. He saw his mom while they were gone. She wants him back. He is confused. Jude listens in from outside the room.

Later that night, Jude confesses to Lena and Stef that he is failing two courses and he is on academic probation. Callie comes in. He tells her she can stay. He admits that living the big college life has been tough. He feels lost. He misses everyone being home together. They all get in to bed together and hug.

The next morning, Corey’s mother sits with him outside the Fosters house. She tells him he will come first this time. She loves him. He comes in to see Stef and Lena. He is crying. They tell him it is okay that he wants to be with his mom. They will still be in his life. He tells them he loves them. They hug.

Brandon arrives home. Eliza is on a busy rehearsal schedule. They all sit down for dinner. Callie reveals that she took the job in LA to be closer to Jude. Mariana thinks she might transfer to LA then. Stef opens up a discussion about Lena running for Assembly. All of the kids think she should and they are okay with them selling the house.

Callie comes in to see Brandon in his old room. He is happy she will be in LA. Callie jokes that Eliza will be thrilled! Brandon laughs. She is okay with her. He is glad she is going to stay in his life. They agree that they both made the right decision not to be together.

Lena and Stef are in the backyard looking around for the last time. They kiss. They will miss this place. They head inside. The house is empty and has been sold. All of the kids come downstairs. They all head out front and take a photo together on the front lawn. They all hug before leaving the house for the last time.