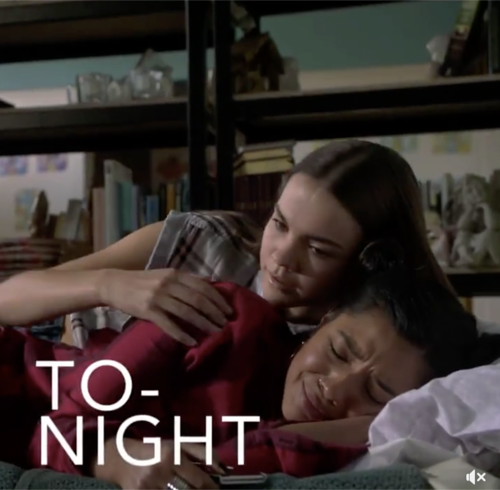 Tonight on Freeform their hit drama The Fosters returns with an all-new Tuesday, January 9, 2018, season 5 episode 10 called, “Sanctuary,” and we have your weekly The Fosters recap below. On tonight’s premiere episode as per the Freeform synopsis, “In the sanctuary of the church, Callie and family support Ximena and her family as they struggle with their immigration status.”

Callie and AJ are in the church with Ximena hiding out from immigration.  Stef arrives outside running into officers who cannot go in and get Ximena because it is a safe haven. They want Stef to bring her out. But she refuses. Meanwhile, Lena tracks down the others telling Mariana and Poppy about immigration and how they are looking for them. Lena is there to pick up Poppy and keep her safe.

Inside the church, Stef tries to figure out what is going on.  She asks AJ and Callie about the night. AJ is worried they will get into trouble. Stef cannot promise him they won’t. Lena pulls up outside and sees ICE. They want to take Poppy and her parents. Lena tries to intervene. Mariana records the incident. They tell her to shut it off, but Lena tells her to keep recording.

Brandon calls Grace’s mom to their hotel after Grace tells him she doesn’t feel good. She is running a fever. Grace gets upset and knows by the way Brandon is acting that he is aware she is sick.

Emma, Jesus, Jude and the others sit and wait at the house. Callie tells Ximena that ICE has taken her parents and Poppy. She tries to leave the church but Callie talks her out of it. Mike shows up at the church. He doesn’t know how long they can keep Ximena safe at the church.

Outside, Stef talks to the police. She doesn’t understand why they want to pick up Ximena just because she spoke out at a rally. Mike and Stef tell the police that they don’t have to cooperate with ICE.

At home, Lena calls CPS to locate Poppy. Jude and Emma talk about Monte leaving the school. Their mother might go with her. Callie begins recording live from the church, sharing Ximena’s story. Mariana spots it. They all begin watching. Brandon arrives home, sad about Grace and her leukemia. Lena tries to comfort him.

Stef and Mike head back to the church and tell the kids to get some sleep inside. They will wait outside in the car and keep an eye on ICE. A worker in the church tells them that ICE might be sticking around to get Callie and AJ in trouble for helping an immigrant. Stef storms outside and confronts ICE. They confirm that they are working on a warrant to arrest AJ and Callie.

Lena calls Stef to give her an update. They are both scared. Inside the church, Ximena is given clothes and blankets for the night. Beth, who works at the church, offers to pray with them. Ximena tells her she doesn’t believe in a god that would split her family up. Alone together after Ximena goes to bed, Callie apologizes to AJ for getting him mixed up in this mess.

Mariana asks Lena when they are alone if she plans on leaving Anchor Beach. Lena explains that she might have to. She might be pushed out and she needs to worry about taking care of the family financially.

In bed for the night, Emma asks Mariana why she looked so surprised when she was looking at her phone earlier. Mariana tells her she got a text from Nick and he knows who ruined the model. He might be able to help them save the school. Emma warns her that he might be up to no good.

Brandon goes to visit Grace in the hospital. She didn’t tell him she was sick because she didn’t want him to look at her like everyone else does, with pity.

Callie and AJ talk about their relationship. She heads to bed. Ximena is still awake. She tells Callie AJ is hot, but not her type. She is gay. She cannot believe she just came out to Callie in a church. They both laugh.

Brandon goes to visit Grace in the hospital. The doctor comes in to tell Grace about an experimental drug she is the perfect candidate for. Her mother doesn’t want her to do it but she insists. Brandon backs her decision, making her mom angry.

Stef and Mike wake up in the car to see hoards of people picketing in support of Ximena. The FBI pull up and after a few minutes ICE leaves. Callie and AJ can leave now. Callie doesn’t want to but Stef and Lena tell her she has to. She promised she would take care of herself.

Callie and Aaron talk outside on the porch. She explains to Aaron that there is nothing between her and AJ. But she thinks they need to take a big step back. They are going too fast and they both have trust issues. They need to reboot and start as friends. He agrees.

Callie talks by video with Ximena. She is still at the church and going a little stir crazy. Callie tells her she is making a video of her story and she has someone who wants to say hi – it is Poppy. She is with the Fosters!