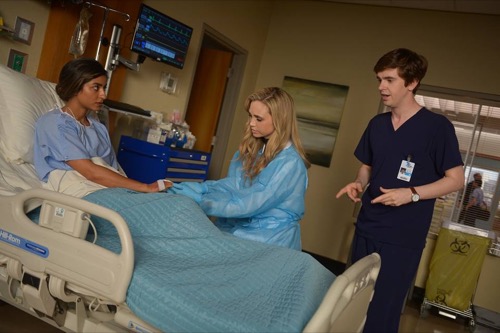 Tonight on NBC their new medical drama “The Good Doctor” airs with an all-new Monday, November 05, 2018, episode and we have your The Good Doctor recap below.  On tonight’s The Good Doctor season 2 episode 6 as per the ABC synopsis, “Shaun and Morgan’s indecision could affect a young violinist’s future.”

The Good Doctor begins tonight with Lea (Paige Spara) coming into the kitchen and Dr. Shaun Murphy (Fredddie Highmore). He asks her to pick up two-ply toilet paper and it must hang over, as that is the only right way.

At the hospital, Dr. Neil Melendez (Nicholas Gonzalez) brings Shaun and Dr. Morgan Rznick (Fiona Gubelmann) to meet their newest patient, who is a musician. She hurt her finger, so Melendez says they can drain it and pack and in 72 hours she will be back to normal. Dr. Alex Park (Will Yun Lee) advises Dr. Claire Browne (Antonia Thomas) to apologize, but she feels she didn’t do anything wrong. Dr. Audrey Lim (Christina Chang) rescues them, saying they have a 13-year-old patient on the way in. Riley Mulloy (Caitlin Carmichael) has severe nosebleed that won’t stop and Lim needs to deal with it quickly.

Meanwhile, Shaun and Morgan talk with their violinist, who should be numb by now, she admits that her pain sometimes goes all the way up to her neck. Shaun says it might be flesh eating bacteria and they might have to cut off her finger, even after Morgan says it could be tintinitus or arthritis.

Alex finds the bleeder in Riley’s nose and when her parents arrive, Alex offers to take the divorced parents to another room so they are not bickering in front of her. Morgan asks Shaun what they need to know for it to be necrotizing fasciitis? He says they would have to remove a portion of her finger, spelling the end of her career. She tells him there is almost zero chance that is what it is; before walking away he wants to know which way Morgan puts her toilet paper and she insists it doesn’t matter.

Riley’s parents return with Dr. Park who want to know if she has been snorting anything, She says she has been using FloNase because of her sniffles and that could have been what caused the thinning of the membranes. Her mother tells her dad to keep her again tonight since she missed an important meeting. They continue to argue and Riley can’t breath as her mom says she is only anxious; Park and Claire return to help her as Riley begins to vomit up blood.

Claire is able to talk to Riley, sharing how bad school was. Claire sends a scope down and feels it might just be from the post nasal bleed. Claire talks to Shaun, who tells Claire that Morgan doesn’t want to perform the right test. He runs into the bathroom and takes photos of the way the rolls are in the bathroom, saying they were installed by professionals sending Lea it. Lea doesn’t care about it; but Claire thinks he should talk Lea and he throws it back in her face that she should talk to Melendez.

Dr. Aaron Glassman (Richard Schiff) is at home, refusing to use his cane. He walks to the front door where Debbie Wexler (Sheila Kelley) brings him some food, but is too busy to stay but will be back tomorrow with dinner for their second date.

Morgan takes care of their patient, talking about how she took archery in school but eventually gave it up. Shaun comes in, revealing she now has a fever and rash throughout her body. He really wants to do an open deep tissue biopsy; but Morgan tells him outside of the room, that being a good doctor is not scaring the crap out of the patient. Morgan questions if he wants to amputate her finger, but the questions are irrelevant when her temperature jumps 2 degrees in the time they are arguing; Morgan agrees to the biopsy.

Dr Melendez comes in, confirming that Shaun was right and they need to get in there and try to save her hand. Once in the OR, the muscle is weak and they hope there is only tissue damage and overnight watch and hopefully things will be okay.

Alex and Claire wait as Riley goes through her scanning. He refuses to divulge any information on his personal life. When the scan is completed, there is nothing to find and Alex says it is time to send the teen home with her parents.

Shaun comes home, and finds the toilet paper on wrong. Lea is running late for work but he panicking over everything; Lea is trying to be accommodating, but he isn’t cutting her any slack. Shaun shuts down as she worries if he will be okay.

Claire is helping a patient into a temporary boot for their Achillies Heel, when Riley’s father rushes her back to the ER; she can’t breath and spiked a fever, Claire feels she has spiked a fever due to some underlining condition; paging Park and Lim. When all tests seem to be clear, Claire thinks they may have misses a progressively growing tumor on her bronchial tube. Alex thinks the saver and better plan is antibiotcs; Lim wants her present the surgery it to her parents and Riley.

Aaron is thrilled to see his home nurse leave for the day but things only get worse when Lea barges in, explaining that she might have broken Shaun. Aaron doesn’t know how to deal with Shaun because he is still learning after 12 years. He tells Lea to sit down, while she is annoying and agitating him. Lea explains that she likes Shaun because he is just Shaun, but she kinda of expected him to change a little. Aaron says it that is, she needs to move out now; it will hurt but the less devastating it will be.

Riley’s parents learn of the shadow on the CT, and they want them to believe in Riley, because that is what a parent does. Her mother reveals how much pain she is in and they don’t know how to make it do away. Riley looks at her dad as he explains what the doctors want to do; all three know it is scary but they do believe the doctors.

Shaun and Morgan’s patient’s alarms sound and they find out she is septic, and now have to amputate her arm, rushing into the OR. Morgan suggests going into the Oxygenized chamber with her, to prevent it from spreading to her other organs. Shaun keeps watch on Morgan and their patient.

Alex, Lam and Claire work hard to save their young patient, Riley. Alex feels it was a mistake and they need to close her up as soon as possible because her exterior wall shouldn’t be this frail. Lim explores more and as Alex traps the lobe they find a piece of Lego in Riley’s lung; something he inhaled when she was really young. After the doctors leave, the parents apologize for everything, including divorce. Riley says they are way better off divorced; but they promise to do better from now on.

Wendy and Aaron enjoy dinner at his place, talking about movies, thoroughly enjoying each others company. Wendy even kisses him, trying to bring him for a walk up the stairs, but he stumbles – a result of him refusing to use the cane in physio therapy.

Morgan informs her patient in the chamber that she had necrotizing fasciitis and they had to amputate her arm. She swears her arm still hurts and she can feel it; Morgan explains that is called phantom pain. She blames Morgan for it and a shouts for her to get the hell out, but doesn’t realize she can’t.

The day is coming to an end, Alex tells Claire it was a job well done; She doesn’t believe his cynicism. Debbie checks on Aaron, who says he is still a little light-headed but the bigger picture is he doesn’t want Wendy there like this and asks her to go. He apologizes as she leaves.

Melendez sees Morgan in one of the rooms and sits down beside her, learning her patient, Jaz played violin since she was 5 years old; Shaun didn’t care, he only saw her symptoms. Melendez says one day that will be the wrong choice. He shares a story a weird second year resident in the program, who wore comic book t-shirts who was fantastic at surgeries and one day he realized he was competing against her, but not vice versa. She simply wanted to be a great surgeon; now Dr. Lim is one of the top trauma surgeons in the country.

Claire gets on the elevator where Dr. Lim and Dr. Melendez are in, both tell her she did a nice save today. Once she exits the elevator, Melendez leaves for a beer with Lim, whom he is sure has something to say to him about Claire’s bad judgment.

Lea apologizes for how she treated Shaun. She reassures him that she is not moving out, as they are both difficult to live with. She doesn’t need him to change but she needs him to know that he is annoying as hell and wants to know if he will try to compromise. He says he can’t use 1-ply toilet paper but the cups can go to the right of the plates. Lea smiles and takes out the recycling; both agree to rearrange the place together. Shaun goes into the bathroom and likes the idea very much of having two toilet paper holders.