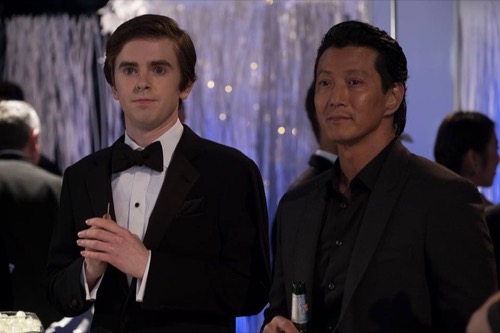 Tonight on NBC their new medical drama “The Good Doctor” airs with an all-new Monday, February 26, 2018, episode and we have your The Good Doctor recap below.  On tonight’s The Good Doctor season 1 episode 14 as per the ABC synopsis, “Dr. Shaun Murphy’s teenage patient has been confined to her home her entire life due to a rare heart condition. Despite her condition, she has cultivated a large group of friends online and hopes that the surgical team can find a way to give her the life she has always dreamed of having. Meanwhile, a young patient’s perfectly matched organ donor is causing a moral dilemma for the parents and the patient.”

The team meets with a teen girl named Spirit who was born with an ectopic heart. They are repairing it now because her ribcage was too small when she was younger. Shaun looks at it in amazement.

Neil meets with the team. He wants them to find a young male patient a liver. Meanwhile, Allegra asks Aaron to find her a new keynote speaker. She wants an old acquittance of his.

Shaun and Jessica scan Spirit while talking about attending the hospital gala. Shaun has a new suit, but Jessica tells him he needs a tux. Shaun notes that Spirit’s heart has enlarged by 53% in the last 6 months.

Claire finds someone who wants to donate a liver. The only problem, he is in prison for killing 7 people. Neil and the others meet to talk about the liability of bringing a prisoner in.

Shaun and the others meet with Spirit. She doesn’t want to wait. She wants the surgery now.

The doctors clean out a hospital room for the prisoner patient. Jared asks Claire to go to the gala with him. Everyone knows they are dating. They both get a beep. They meet with the Eric. He doesn’t want a liver from a prisoner.

Jessica presents an idea for Spirit to Dr. Lynn and Shaun, a retractable rib cage in the front that can accommodate her large heart. Shaun thinks it is a bad idea. Jessica thinks he doesn’t understand Spirit’s emotions because he has autism.

The team watches as the prisoner is brought in with shackles on.

Claire, Jared, and the others examine the prisoner. Jared rushes to see Eric who he sedates after he fails in his bed, angry about receiving a liver from a prisoner.

Shaun asks Andrew about getting a tux. He tells Shaun to rent.

In the OR, the prisoner is ready for surgery. Neil administers anesthesia. The man begins to have an allergic reaction. Later, the prisoner wakes. He is upset that he cannot helps. He begins to get angry before tearing up.

In surgery, Jessica tells Shaun that he shouldn’t trust Andrews advice. They see that the plate is a perfect fit in Spirit’s chest. Meanwhile, the guards bring the prisoner out. He tells them he cannot feel his legs. They don’t believe him. He manages to grab a guard and a gun. Claire tries to reason with him but he shoots himself with it. They rush him to the OR to get his organs.

Claire rushes to meet Eric and get him into an OR. After she tells him what happened he agrees to accept the liver.

Spirit finally hugs her mother for the first time after she is told things look good post-op.

Shaun arrives at the gala in his tux. He sees Jessica. She tells him to mingle. Meanwhile, Neil checks Eric. Things look good. Eric wants to send the prisoner’s family a card, thanking them for the liver.

Shaun feels overwhelmed and leaves the gala. He watches Spirit in her room with her friends.

Claire and Jared dance as a couple at the gala. He tells her he loves her before walking off because she doesn’t remember a song they listened to together.

Shaun returns to the gala. Andrews helps make him comfortable after he decides to mingle.